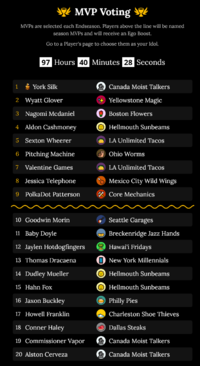 An Idol is a fan's favorite Blaseball player, whom they support and cheer for every game. All fans are incredibly loyal to their Idol, and thus may only have one at a time. Idols need not even be on a fan's favorite team.

Fans may choose to idolize a player on that player's page. It will cost a fan 200 coins to betray their idol and choose another.

The Idol Leaderboard stands as a monument to the 20 most idolized players, displaying their popularity for all to see.

Currently, and since Season 13, a zig-zag yellow line, sometimes called the "noodle", exists on the Idol Leaderboard. All players above this line at the end of day 99 of the regular season are declared MVPs (Most Valuable Players), and receive an "Ego Boost".

If a player receiving an Ego Boost has never had one before, they receive the modification Ego+. If they then get an Ego Boost again, they receive Ego++; and so on until reaching Ego++++ after four Ego Boosts. As far as is currently known, the only effect of all Ego modifications during play is that players with Ego will occasionally resist being swept off base by surges of Immateria during Flooding weather, with the message "(player)'s ego keeps them on base!"

If a player with Ego++++ receives a fifth Ego Boost, they become Legendary. Legendary players cease to be on a team, leaving their existing roster, and are then said to have been "Preserved". The only players who have returned to active status from being Legendary are Parker MacMillan (Super Roamed out of the vault) and Sutton Bishop (swapped with Glabe Moon of the Boston Flowers via the Season 23 blessing "Vault Swap").

In earlier seasons, position on the idol board has had other effects. For example, during seasons where there was a dotted red line, players lifted above the line were often subjected to a new event taking place after the conclusion of Day 99 games. During The Discipline Era, any players above the dotted red line were Shelled at the end of the regular season, encasing those players in gigantic peanut shells, preventing them from actively playing.

Pendants were adornments purchasable in the Shop. They were the conduit through which fans were rewarded for their undying loyalty in their Idol. When an Idolized player performed well, fans received Coins in return.

Pendants existed in 4 different forms, each reacting to different accomplishments a player may make during a game. For lineup players, pendants may track hits or home runs. For pitching players, they can track strikeouts and shutouts.

Pendants were replaced with Snacks during the introduction of Concessions in Season 12.

Fans first became aware of their penchant for Idolatry at the beginning of Season 6. The fad quickly spread, and fan favorite Players such as Jessica Telephone, Nagomi Mcdaniel, Axel Trololol, PolkaDot Patterson, York Silk, and Randall Marijuana shot to the top of the Leaderboard; both for their popularity and for their reliable success in games.

In Season 6, the dotted red line split the top three players in the leaderboard from the rest of the top idols. The purpose of this wasn't revealed until The Third Strike, when The Shelled One encased the non-peanut named players above the line in gigantic peanut shells. After this, fans pushed the three Peanuts above the line, and the line disappeared shortly after.

The dotted red line reappeared on the leaderboard again in Season 7, this time splitting the top 10 idols from the following 10 idols. After the conclusion of the regular season, the players above the dotted red line were once again Shelled, which included the entire Unlimited Tacos pitching rotation, PolkaDot Patterson, and Axel Trololol. All of the three Peanuts were also above the dotted line, receiving the Honey Roasted modification and pleasing The Shelled One.

In Season 8, the dotted red line was positioned under the top 5 idolized players. Additionally, new Feedback icons appeared next to the 6th, 11th, and 18th positions on the leaderboard.

At the end of the regular season, the dotted red line vibrated once more. The top five idolized players were Pitching Machine, York Silk, Jessica Telephone, Peanutiel Duffy, and Axel Trololol. Duffy is immune to being Shelled by being one of the three peanuts, while Trololol was previously Shelled. Machine, Silk, and Telephone are now Shelled.

In the 6th, 11th, and 18th positions were Jaylen Hotdogfingers, NaN, and Sixpack Dogwalker. Following the conclusion of the season, Hotdogfingers received the permanent modification Flickering. NaN and Dogwalker also received Flickering, as well as receiving the new modification Receiver, which appears to be a method through which The Microphone can speak. NaN's and Dogwalker's pre-game rituals then changed three times in rapid succession:

It is presumed that "Wyatt" is NaN, who is Wyatt Mason Prime, who lost their name during the The Unmasoning.

Season 9 marked the first season since the Idol board was introduced that there was no dotted red line splitting any members of the leaderboard apart. Instead, there was a small icon on the left hand side of the board of The Monitor, who was placed right next to the top-most idolized player that had the modification Shelled. At the end of the regular season, in a traditional post-season transmission, The Monitor attempted to eat PolkaDot Patterson, the top-most idolized Shelled player. Finding the taste unpleasant, the Monitor claimed "that egg [was] spoiled" and left Patterson with the modification Squiddish, replacing Shelled.

On the evening of Thursday, October 15th, 2020, Baltimore Crabs began idolizing Tillman Henderson, who was recently incinerated, as a joke. However, upon reaching Slot 18, which was marked with a Blooddrain icon, both the icon and the numerical marker lit up in a deep blue, much like the appearance of the Hall of Flame and speeches from The Monitor. Fans quickly mobilized to idolize more incinerated players, and by Day 97, six players had occupied all six weather icons, in order: Caligula Lotus, Landry Violence, Workman Gloom, Sebastian Telephone, Tillman Henderson, and Randall Marijuana. Additionally, fans placed Jaylen Hotdogfingers in slot 14, based on tweets from The Microphone repeatedly calling out to Jaylen. As usual, fans expected an event to be triggered at the end of Day 99.

However, as Day 99 came to an end, a late minute shift in the idol board led to unpredictable results. In a twist, Tillman Henderson came back to life to join the Charleston Shoe Thieves, while Jaylen Hotdogfingers's Returned modification forced them back into the Void, taking Henderson's position on the board in the Hall of Flame. Henderson gained the modification Returned, and is now the second player to have returned to active play from incineration. Hotdogfingers gained the new modification Fliickerrriiing, but cannot make use of it without being in active play.

Additionally, umpires performed a reset on the leaderboard early in the season, causing participants to pick a new idol and shuffling players on THE SHELLED ONE'S PODS off the leaderboard. PODS players could not be reidolized after this reset.

Following the end of the Discipline Era and the death of the Shelled One, the Idol board in Season 11 offered no new mechanics, weather interactions, or blessing interactions, with no dotted red line.

In Season 12, the Shop was replaced with Concessions, which itself brought a new selection of snacks for Fans to purchase. Many of these snacks related to passive income bonuses from idolizing players. Fans are able to hold eight items in their Snack Pack at once, limiting what they can carry at once.

After a Season 12 with no changes to the Idol board, Season 13 ushered in a new idol board with the numbers 1 through 9 in yellow, same color as Boss's text. A wiggly line appeared at the cutoff, and above the Idol board:

MVPs are selected each Endseason. Players above the line will be named season MVPs and will receive an Ego Boost.

Over the course of the season, the line moved up and down slightly, cutting off the top 8 and top 10 players, before finally ending at the top 10. The selected MVPs were:

The list of MVPs was influenced by a Fan-led effort called the "Dom Wom Joe Bong Yams Con MVP Plan Extravaganza with Pickles" which attempted to place several lower performing players from the Shadows and Hall of Flame on the leaderboard. The plan was intended to disrupt any attempts Boss may be making to assemble a team of players, similar to THE SHELLED ONE'S PODS and The Shelled One. Of the players targeted by this effort, Peanut Bong and Sutton Picklestein, who was added to the plan as a memorial after their recent incineration, were successfully pushed into position in time for the MVP selection.

Following the Day 99 games, Monitor introduced the MVPs for this season. Several MVPs from last season remained on the board, and their Ego+ modifications were replaced with Ego++. All new entrants to the board received Ego+. The MVPs were:

Following the Day 99 games, Boss introduced the MVPs for this season. Only three players were named as MVP this season:

Following the Day 99 games, Lōotcrates introduced the MVPs for this season:

As in prior seasons, all MVPs' Ego modifications were upgraded by one step, to a current maximum of Ego++++ for Silk and Mcdaniel.

Following the Day 99 games, several players remained above the line and had their Ego modifications upgraded to the next tier.

Additionally, York Silk and Nagomi Mcdaniel, two players who previously held the Ego++++ modification, were upgraded to Legendary, which removed them from the idol board and their previous teams and made it so that Fans could not Idol them.

Aldon Cashmoney, Goodwin Morin, and Pitching Machine were upgraded to Legendary and removed as active players.

Valentine Games reached Legendary status and was added to the Vault.

No players reached Legendary status and thus no further players were added to the Vault.

James Mora reached Legendary status and was added to the Vault.

Wyatt Glover reached Legendary status and was added to the Vault.

Paula Turnip reached Legendary status and was added to the Vault.