This page is about the first season of Beta. For the current era, see Season 1.

Season 1, the inaugural season of the newly-returned Internet League Blaseball, began on July 20, 2020. The regular season ended on July 24. The postseason and first Internet Series since Blaseball's return occurred on July 25.

The "Return" of Blaseball

Internet League Blaseball first became observable on July 20, 2020, with the introduction of 20 teams across the Good League and Evil League. Official sources such as The Blaseball Beat refer to this as the "revival" of Blaseball, marking "the first Internet Series since the splort returned," confirming that Blaseball has always existed.[1]

* Denotes teams that advanced to the playoffs. 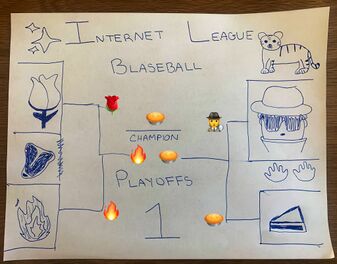 Teams that advanced to the postseason:

The Philly Pies went on an undefeated run in the postseason to win the championship.

The election form stated: "Only 1 Decree will go into effect. The Decree with the most votes from the community wins."

At the conclusion of the season, the following were enacted:

After Season 1 blessings were awarded, the umpire ump_chaff announced two more blessings that "happened at the same time as the regular election but were not officially part of said election." The umpire then stated, "I've added these transactions to the site as public knowledge."

During the elections, after blessings were processed, Nicholas Mora and Yazmin Mason swapped teams, with no indication as to why. This may have been a third mystery blessing that was never recorded.[2]


During the fourth Inside A Blaseball stream, the developers revealed that these mystery blessings were most likely due to a bug that caused the election to run multiple times.[3] According to the developers, this bug likely also overwrote a version of the election where the Yellowstone Magic won several blessings - the team would go on to not win a single blessing until Season β8.