Wherever the vibes are right

Soundproof (Season 6)Player: This Player cannot be caught in Feedback's reality flickers.
Team: Players on this Team cannot be caught in Feedback's reality flickers.
See also: Glossary
Targeted Shame (Season 10)Teams with Targeted Shame will start with negative runs the game after being shamed.
See also: Glossary
The Fifth Base (Season 10)Ballpark: Teams playing in this Ballpark must run five bases instead of four.
Team: This Team must run five bases instead of four.
See also: Glossary
RogueThis Team is Out for a Surprise Attack.
Sinking ShipThis Team plays 1% worse for every Player above 14 Players on their roster, and 1% better for every Player below 14 on their roster.
SquiddishWhen a Squiddish player is incinerated, they'll be replaced by a random Hall of Flame player.
Under ReviewThis Team is Under Review...

The Hawai'i Fridays were a blaseball team in the Mild Low division of the Mild League. They were a part of Internet League Blaseball from Season AA until being incinerated on Season 24, Day 12. They previously played in the Chaotic Good Division of the Good League. Officially recognized as the most chill team, they frequently arrive late to games as they are always on island time. 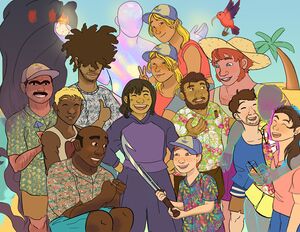 Preserved in the Vault

In the Season 7 election, the Fridays recieved six blessings:

In the Season 10 election, the Fridays won the People's Champions blessing, trading Evelton McBlase II, Baldwin Breadwinner, and Bevan Underbuck for Nagomi Mcdaniel, Sutton Dreamy, and Montgomery Bullock. The Fridays also benefited from the effects of the Shadow Ban Together blessing won by the Charleston Shoe Thieves, boosting their shadows by 3%.

In the Season 11 elections, the Fridays were assigned the Arcana II The High Priestess.

In the Season 12 elections, the Fridays received the Trust will, granting Jacob Winner the Flippers modification, and the Infuse will, increasing Alyssa Harrell's stats. The Fridays also traded Nagomi Mcdaniel to the Seattle Garages for Greer Gwiffin due to the Garages' Plunder will.

In the Season 13 elections, the Fridays received the Foreshadow will, bringing Fenry Marlow forth from the Team's Shadows in exchange for Lizzy Pasta, and the Infuse will, increasing Alyssa Harrell's stats once again.

In the Season 14 elections, the Fridays received the Exchange will, sending Alyssa Harrell to the Baltimore Crabs in return for Baldwin Breadwinner. They also received the Plunder will, trading Greer Gwiffin to the LA Unlimited Tacos in return for Valentine Games. In addition, Spears Taylor received the Walk in the Park modification due to the the Solo Stroll blessing.

In the Season 15 elections, the Fridays received the Move will, switching Juice Collins from the lineup to their rotation. They also received the Alternate will for Baldwin Breadwinner, which granted the alternate player the Parasite modification. The Fridays won two blessings, Bird Brain, which gave Jacob Winner the Affinity for Crows, and Batting Practice, which boosted their lineup's batting stars by 1 to 4%.

In the Season 16 elections, the Fridays received the Move will, switching Baldwin Breadwinner from the lineup to their rotation. They also received the Transfuse will for Fenry Marlow, infusing their pitching and outfusing their batting.

In the Season 17 elections, the Fridays received the Transfuse will for Juice Collins, infusing their pitching and outfusing their defense. They also received the Reform will for Beck Whitney, rerolling their Roamin' modification to High Pressure. The Fridays won the Handcrafted Sunglasses Drop blessing, gifting Stevenson Heat Smokey Blood Sunglasses.

In the Season 19 elections, the Fridays received the Foreshadow will, sending Mordecai Kingbird to the Shadows in exchange for Yasslyn Statter Jr.. They also received the Move will, moving Mordecai Kingbird from their bullpen to their bench. Additionally, they received the Equivalent Exchange will, sending Alyssa Harrell to the Chicago Firefighters in return for Gabriel Griffith. The Fridays won three blessings, Shadow of the Bats, which adjusted their Shadows’ pitching from -5 to 20%, Walk It Off, which improved Spears Taylor’s Moxie by 29%, and Shadow Sunglasses Supply Run, which gifted all Shadows players with an open item slot a pair of Sunglasses.

In the Season 20 elections, the Fridays received the Shadow Infuse will for Cordula Standlake, infusing their pitching. They also received the Move will, moving Yasslyn Statter Jr. from their rotation to their Shadows. The Fridays won two blessings, Pitch Runner, which moved Stevenson Heat to the lineup, and Slow Clap, which gave Don Mitchell the Slow Build modification.

In the Season 21 elections, the Fridays received the Shadow Infuse will for Melton Campbell, infusing their defense. They also received the Roster Swap will, switching Don Mitchell from their lineup to their rotation in exchange for Yosh Carpenter. The Fridays won the Recruit Ego blessing, which recruited Nicholas Mora to their lineup from the Canada Moist Talkers. 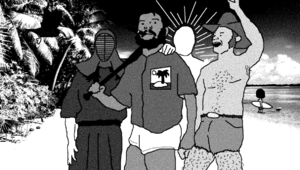 Newspaper clipping of some Season 2 Hawai'i Fridays players chilling together.

The Fridays are blessed/cursed by Our Lady of Perpetual Friday. For the Fridays, it is always island time. Players cannot feel the passing of the hours for it is always late afternoon on Friday, a time to stop worrying about the trials of the week and instead a time to hang out with family and friends. No matter the temperature, the Fridays experience the weather as a cool 70-something degrees with a pleasant ocean breeze. The smell of pit oven smoke lingers around them. They are fun at parties.

The Fridays are a workers' cooperative where each player owns an equal stake in the team. Departing players give their shares to transfers. There are outside sponsors, such as singer-songwriter Rebecca Black. There are no coaches, managers, or non-player owners. Everyone on the team fills these roles simultaneously.

The Fridays never go home from a game before having a nice cookout with the opposing team. Fan cheers include the classic "TGIF!', the lengthier "TGIFE24HADAFH" (Thank God It's Friday Every 24 Hours All Days Are Friday Here), "GRILL'S UP!" during the 7th inning protein snack, "WSSSHHH!" (wave noises), and "IT'S ISLAND TIME!" (the team motto). 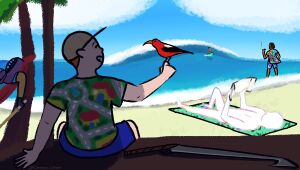 The Fridays do not have a proper stadium and prefer to play wherever the vibes feel the best.

The lack of a set stadium means there is no PA system, and so batters are played to the box by the combination of Stevenson Heat on ukulele and Jimmy Mora on vocals (even while either are on the mound), the duo unofficially called 'More Heat'.

The Fridays traditionally set up their snack and frosty drink carts next to third base. This leads to many Fridays players getting thrown out trying to steal third, as they forget about the game and leisurely stroll over to check out the cart. Efforts to move the carts to a less accessible and game-altering place have been strongly resisted by former captain Elijah Valenzuela ("All such things should be freely available to the people.") and pitcher Stevenson Heat ("I just gets real hungry sometimes, you know?").

The Fridays no longer have a fourth base, as their original one gained sentience to become Evelton McBlase. As such, the team uses Daddy Bradley's lucky ballcap to mark its location during games. Due to the chill nature of the team, the placement of the ballcap is never exact and that often results in differing lengths of the first and third blase lines from game-to-game.

There is no Fridays uniform. Players wear whatever they want—sometimes in team colors, sometimes not. (Always in 'aloha shirt' patterns.) Despite not having a uniform, the Fridays do have a dress code: if wearing a shirt, at least one button must be unbuttoned to feel the ocean breeze. It is unclear if any player has read the dress code. 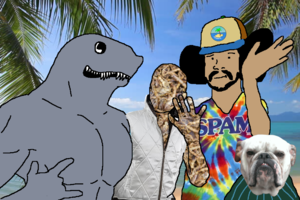 Blaseball players of various teams having fun at a Fridays beach cookout. 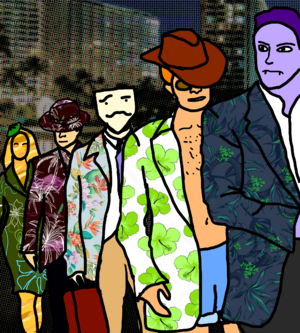 Juice Collins, Don Mitchell, Evelton McBlase, Stevenson Heat, and Beck Whitney going to the Blellagio after a game. By @ch00beh

There is no official team mascot. At various times, the Fridays mascot has been: any bird in the vicinity of the game currently going on (often Hawaiian honeycreepers, such as Fletcher Yamamoto himself), a fan dressed up as a volcano, Our Lady of Perpetual Friday, C O C O N U T, or literally anything silly that shows up to the game. Lately, Gabriel Griffith has taken it upon himself to act as a mascot when not pitching.

The official drink of the Fridays is Mountain Dew® Baja Blast Freeze. Unofficial drinks include piña colada, margarita, Capri Sun, Sunny D, Pineapple Spindrift, and (not really a drink) Hawaiian-style shave ice. These are kind of like mascots.

Although the team has no owners, this almost changed due to the persistent need for 'drink money' in the lead-up to Season 2. T.G.I. Friday's restaurateur Daniel R. Scoggin attempted to buy the team. On his way to seal the deal, however, Scoggin got lost at sea. The deal accordingly never took place, although T.G.I. Friday's did manage to secure a minor sponsorship for mascot rights, which simply means that the team serves the T.G.I. Friday's drink menu at home games (e.g. THE BEST FRIDAYS™ MARGARITA, etc.).