Spears Taylor is a player for the Boston Flowers, and has been with the team since Fall Ball. Taylor has played for the Philly Pies, Hades Tigers, and Hawai'i Fridays.

Taylor joined the ILB as a lineup player for the Philly Pies with the Return of Blaseball.

On Season β3, Day 98, Taylor swallowed a peanut and had an allergic reaction. This lowered their overall rating from to .

On Season β4, Day 43, Taylor exchanged to the Hades Tigers due to Feedback. Taylor was replaced by Jessica Telephone. Having played with the Pies during their victories in the first two season, Taylor, alongside Yazmin Mason, became one of the first two players to be on the winning team of three internet league championships. This title would have gone to Telephone had the trade not happened.

Taylor was traded to the Hawai'i Fridays in exchange for Aldon Cashmoney during the Season β8 elections via the Blind Date blessing.

During the Season β9 elections, Taylor received the Siphon modification due to the passing of the Forecast: Blooddrain decree.

During the Season β14 elections, Taylor received the Walk in the Park modification as a result of the Solo Stroll blessing.

During the Season β19 earlsiesta Taylor was given the Seeker modification as part of the seasonal reading.

On Season β22, Day 11, Taylor retreated to the Fridays' Shadows in exchange for Cordula Standlake at Hawai'i Viberight Field via the Ratified Voicemail. During the Season β22 elections, Taylor's star ratings were completely randomized as a result of the Shadow Alternate Trust blessing, resulting in Taylor becoming an Alternate and gaining the Negative modification.

Over the course of Season β23, Taylor entered and exited the Fridays' Shadows two times as a result of Hawai'i Viberight Field Fax Machine events, ending the Season in the Shadows.

During the November 18, 2022 Fall Ball, Taylor fell to the Boston Flowers.

Taylor gained 1/2 a star overall in the Season 1 elections as a result of the Flowers' NEW Team Boost blessing.

As an imp summoned using demonic magick by the 13th Order of Bloodstone Warlocks, Taylor is considered native to Hades. Although most imps are conjured to perform some menial labor, Taylor proved to be overly capable as a janitor/hoplite and was instead used as a covert agent by the order, capable of breaking into military installations, noble manors, and corporate headquarters while carrying multiple unwieldy pole weapons.

Following the demise of the 13th Order of Bloodstone Warlocks, Taylor was unbound by all fel pacts and able to live and roam freely. They eventually left the underworld to roam Eastern Canada and Europe before reaching the Philly metro region.

Conjured henchmen by nature, imps are known to be impressionable creatures, and Taylor took on numerous jobs during this wandering time. Taylor was approached by Sam Hinkie outside of The Oven three hours before the first match of Season β1 when Hinkie realized the Pies never signed a Third Baseman. Taylor accepted the position despite never watching a Blaseball game. To this day, Taylor rejects any splorts representation or sponsorships, calling them "capitalist distractions".

During Season 7, Taylor declared themselves mentor to Richmond Harrison. Taylor taught Harrison everything he knew about Blaseball, which unfortunately wasn't much. During the offseason, Taylor and Harrison then decided to mount a series of expeditions around the world to visit the home cities of other teams and find Blaseball wisdom. It was at their last stop, the infinite Los Angeli, where the pair managed to lose their way in spacetime and encounter their future selves in a paracausal event.

Taylor was disappointed to find that their future self wasn't actually any better at Blaseball at all, and couldn't teach them anything they didn't already know.

Spears Taylor was at one time rated the second most anticapitalistic (warning: FORBIDDEN KNOWLEDGE) player in the league due to a history of throwing literal spears at capitalists. Taylor is perhaps best known for the incident where they threw a partizan at Bees Kneesos, or the time they made the news for clipping Eli Rank with a halberd. They love to steal... those bases!

Taylor has always had an obsession with equipment management, as players typically share equipment harmoniously without an expectation of ownership. Tigers manager Fearful Symmetry has been wary about appointing Taylor to this volunteer role, since they keep whittling bats into stakes and inserting iron tips into the balls.

Taylor has a lifetime ban from the underworld ride-sharing service Lyfe due to several incidents resulting in pierced upholstery. Since Taylor lived in the Sixth Circle Stadium Equipment Manager's Office and has the Hades Public Bus Route committed to memory, the lifetime ban has had no impact on their life (although they have compensated the drivers for the interior damage after Lyfe refused to). 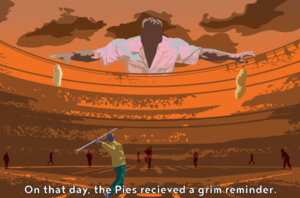 On day 98 of Season 3, Taylor attempted to throw a spear into the heavens in order to bring down the Blaseball Gods themselves. Shortly after this rebellious act, they swallowed a stray peanut and had an allergic reaction. These events are assuredly a coincidence, as is their later banishment to the underworld via feedback.

Since the allergic reaction, Taylor has been prone to shrinking and growing unexpectedly, diminishing their ability to hit and run to bases. However, the new condition has not affected their prowess at throwing spears while playing defensively.

After feedback-ing from the Pies to the Tigers, Taylor was provided with, according to onlookers, "just an unreasonable number of pikes, glaives, lances [...] A big pile of loose pole-based weapons." When asked to comment on why, Fearful Symmetry said, "We actually had those lying around already. We've been trying to get rid of them for ages."

When approached by the media, Spears has refused any glory or attention connected to this title, stating such excuses as "I had strep throat during the awards ceremony for Season 1, so I never actually received that award".

Spears Taylor's origins are shrouded in mystery. However, many claim that they follow a similar fate as fellow Pies player Kennedy Cena, being an amalgamation of both Taylor Swift and Britney Spears. After joining the Tigers, Hades fans also began to speculate that they may be a siren instead. Neither of these theories have been confirmed, but eyewitness karaoke reports testify to the beauty and horror of their singing.

With the Hawaiʻi Fridays

Traded at the Season β8 elections to the Hawaiʻi Fridays, Taylor quickly adapted to a mostly permanent place outside of Hades. While the islands were significantly different from Hades or Philadelphia, Taylor’s adaptable nature served them well as they became one of the strongest defensive players for the Fridays. Taylor would play a number of fielding positions, becoming extremely proficient at using their numerous sharp weapons to snag blaseballs midair. No ILB umpires could be reached for comment on the number of blaseballs that needed to be replaced mid-game due to Taylor’s innovative defensive techniques.

Once acclimated to Hawai’i, Taylor really let their spunky and energetic personality shine, always getting into some sort of chaos or another. Prone to violence and fishing, fellow Fridays have described them as “peppy”, “morbid”, and “argumentative”. In interviews, many have frequently gone on long trains about the pranks Taylor has pulled before games, after games, during games, during practice, during brunch, and whenever they were in a particularly mischievous mood. They also spent much of their free time delving into personal projects and interests, reportedly spending hours devoted to their hyperfixations and only breaking to move onto the next one.

Taylor acquired a number of modifications over their time with the Fridays, including tapping into their impish heritage and becoming a Siphon, getting to base more frequently with Walk in the Park, and, in the Season β19 earlsiesta tarot reading, becoming one of the first eight Seekers. As a Seeker, Taylor used specially modified spearfishing equipment to give Elsewhere teammates something to grab onto before Taylor brought them back to the material plane. They performed this duty with passion, extremely protective of the Fridays. Taylor has never revealed what they asked Our Lady of Perpetual Friday for infinite time to do.

Taylor was known to be on good terms with all Fridays players, and was usually seen cooking after home games using numerous pointed instruments to prepare a variety of grilled fare. They were particularly close with the possibly-real Alyssa Harrell. Harrell joined the Fridays shortly before Taylor, and Spears was uncommonly able to recall Harrell’s presence - something they hand-wavingly attributed to their demonic heritage. Once Harrell was traded to the Baltimore Crabs at the Season β14 election, Spears was one of the few Fridays players who would regularly remember her existence - a phenomenon that became even more pronounced after Harrell’s redaction in Season β15.

When Harrell emerged from the Secret Base during a game against the Taylor’s original team, the Philadelphia Pies, in the postseason of Season β17, Spears took the opportunity to ensure their friend would continue to be perceived, batting her in and Attracting Harrell back to the Fridays’ roster. After Harrell was repeatedly swept Elsewhere after rejoining the Friday’s active roster, Taylor’s Seeker abilities repeatedly brought her back. Taylor was alternated at the Season β22 elections alongside Harrell, and while displaying little physical change, both of them seemed to be closer friends afterwards. Both players would oscillate through the Fridays’ shadows and rotation during Season β23, and when the Fridays were incinerated on Season β24, Day 12, both were in the pitching rotation.