Ballparks are a feature added to Blaseball in Season 12. Following the Season 11 elections, when Fans elected to "Close! ...the Forbidden Book...", the Election Results noted that ground was broken on the Crabitat. Season 12 introduced a new mechanic allowing Fans of teams to build and customize a Ballpark to the benefit of their teams. According to the Glossary, a Ballpark is "A venue where Blaseball is played and the location of a Team's home games."

Construction of a Ballpark 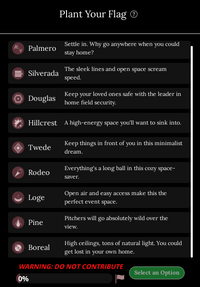 When given the option to build a Ballpark, fans can see the following instructions:

Plant Your Flag
⚾ Spend coins to Contribute to the building & renovating of your team's Ballpark.
⚾ To break ground on your stadium, choose a Ballpark Prefab as a starting point.
⚾ The Ballpark Prefab with the most coins will be chosen for each team.
⚾ All Ballpark construction goes into effect in the Latesiesta, after Day 72.

There are nine prefab options to select from:

Fans select from one of the prefabs, and donate coins towards the construction of their chosen Ballpark style. Funding must be completed during the Midseason.

See the main article on this topic: Renovations 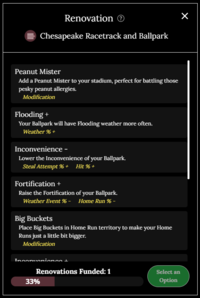 Following the construction of a Ballpark, Fans will have the option to build Renovations to further customize their team's ballpark experience. Renovations have the following rules:

Each season, teams are offered a selection of nine Renovations from the list of possibilities. Fans will be able to pay for more than one Renovation per season, with construction completing in the Latesiesta.

The list of available Renovation options can be found on Renovations. 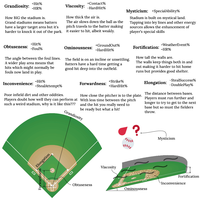 A visual representation of how Ballpark attributes affect Ballpark shape. Visualization by Sinjid#0042.

Ballparks have a number of attributes, similar to Players, that can affect various in-game events and performance.

Filthiness is a measurement of how much debris, mess, etc. exists in the Ballpark. Certain events have been noticed to increase Filthiness, including Flooding weather, Glitter weather, and Items breaking. Foul balls appear to have variable Filthiness, even occasionally negative Filthiness. Filthiness can be removed via Ballpark Cleanup renovations, and the Flood Pumps Ballpark modification can prevent flooding from increasing Ballpark filthiness further.

As of Season 24, it is unknown what effect, if any, Luxuriousness has, as it has always remained at its minimum value for all known Ballparks.

At the start of Season 12, Fans discovered that if they clicked on a Black Hole weather icon, they could see the Baltimore Crabs' team page, which featured a new tab. The tab was covered with a red banner, reading "KEEP OUT," and when clicked on, showed the Chesapeake Racetrack and Ballpark, also known as The Crabitat. Fans who had chosen the Crabs as their favorite team saw an additional message that indicated construction would begin after Day 27, on the Earlsiesta.

Following the first Earlsiesta in Season 12, Fans of the Crabs were able to donate to the construction of their Ballpark, in the prefab styles of their choosing. The Fans fully funded the construction project in approximately 15 minutes, and were greeted with notice that the construction would complete after Day 72, the Latesiesta.

However, while funding the Ballpark, bright red messages warned Fans of their choices:

WARNING: DO NOT CONTRIBUTE
DANGER
AUTHORIZED ENTITIES ONLY
CEASE AND DESIST
BREACH IMMINENT

Several days later, during the first Latesiesta, the Crabs descended from the Big Leagues, also bringing with them three new teams: the Atlantis Georgias , Core Mechanics, and Ohio Worms. Additionally, all other teams were able to see their own upcoming Ballparks, and donations for those began in the Season 13 Earlsiesta.

Ballparks across the League

In the Season 13 Earlsiesta, the rest of the teams across the League began construction on their Ballparks. Many of them finished funding the stadium within minutes, with latecomers soon ensuring all teams were fully funded. Construction was completed for all Ballparks the following Latesiesta, with the Baltimore Crabs completing construction of the first Renovations, Inconvenience - and Peanut Mister.