From Blaseball Wiki
The subject of this page has been Preserved.
They may have participated in the ILB Semi-Centennial. No other information is available after their entry into the Vault. Tour the collection here.
In case of incomplete records, post on the Talk page.

Valentine Games is a lineup player for the Vault Legends, and has been with the team since the ILB Semi-Centennial. Games has previously played for the LA Unlimited Tacos, Houston Spies, New York Millennials, Breckenridge Jazz Hands, Baltimore Crabs, and Hawai'i Fridays.

On Season 3 Day 98, Games swallowed a stray peanut and had a yummy reaction, which increased Games's rating from to .

On Season 7, Day 15, Games's defense ability was siphoned by Kansas City Breath Mints batter Marquez Clark in a game with Blooddrain weather, bringing it from to .

On Season 7, Day 56, Games siphoned some of Hades Tigers pitcher Yazmin Mason's hitting ability in a game with Blooddrain weather, bringing it from to .

Throughout Season 10, Games's defense ability was absolutely destroyed by various Blooddrain incidents. Just mangled. Devastated. One-starred. Luckily, the other players on the Tacos have been kind and understanding as usual, and are willing to pick up the fielding slack in exchange for Games's obscure but helpful tips on hitting dingers.

During the Coffee Cup, Games played for Atlético Latte as a lineup player.

Games was traded to the Hawai'i Fridays in exchange for Greer Gwiffin during the Season 14 elections via the Fridays' Plunder will.

After Day 99 of Season 19, Games was Preserved.

During the ILB Semi-Centennial, Games played for the Vault Legends as a lineup player.

Dust billows as the file box lands on the table. While many archives in the Interdimensional Rumor Mill are unified in some way, this... definitely isn’t one of them. The accompanying Rumor Registry explains all of the contents... wherever it is... but for now you grab the folder labelled IF-88.00 and start reading...

While they share a surname with Charleston Shoe Thieves players Cornelius Games and Richardson Games, it has been confirmed that the three players share less than 80% of their biomass and thus are allowed to compete as separate players.

They are rumored to be descended from Calypso, the late three-legged sea turtle who once lived in the National Aquarium. 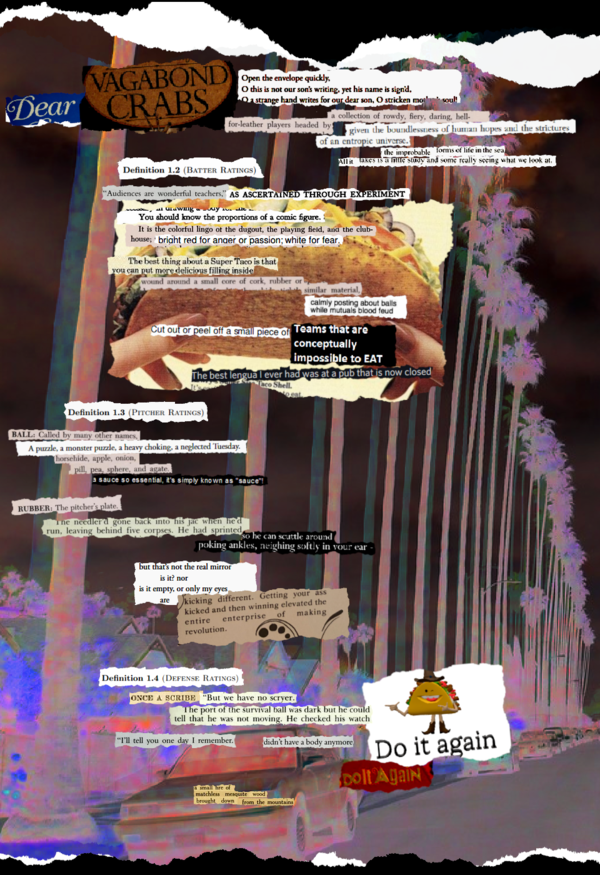 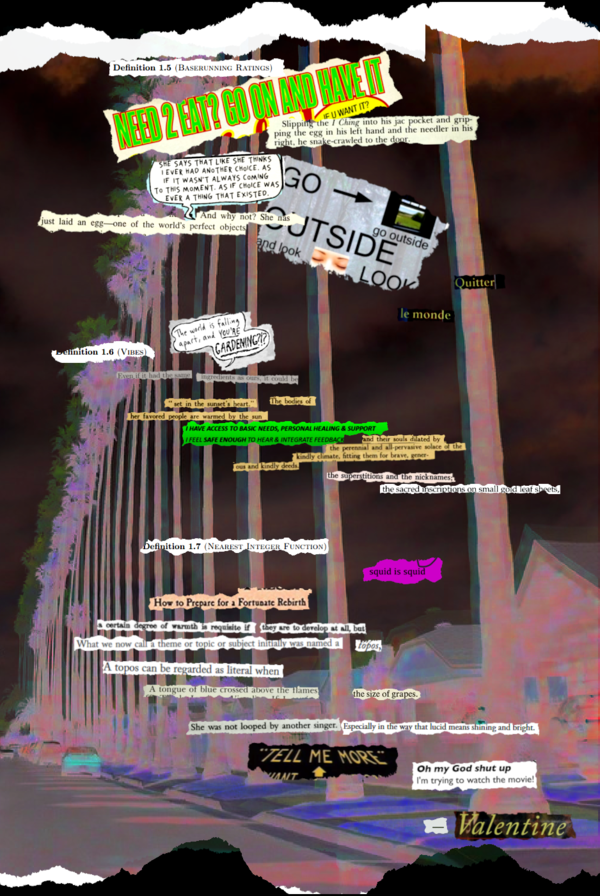 (To read all the poems, click here. Refresh to get another one.)

Valentine Games joined the ILB as a member of the Baltimore Crabs, but fate had other plans for this charming wanderer.

Though Games has a nomadic heart, his devotion to the Crabs is one of the few constants in his life. The relationship is more than pure team loyalty. Games, an accomplished poet, believes in the inherent divinity of the natural world — and in a universe whose arc points towards the eventual carcinization of all living beings. Their clothes are often encrusted with ocean salt — a strange occurrence, given that not all the teams they've called home have been near the sea. Still, communing with nature, transcribing its messages, and seeking the greater mysteries of the world and Blaseball are core to their life, no matter what town they call home for the moment.

Time with the Houston Spies

Because Games has an interest in life's greater mysteries, spending some time with the Houston Spies was a natural choice. During a Feedback event during Game 51 of Season Six, Games, at that time with the New York Millennials, swapped places with then-Spies hitter Andrew Solis. The swap was mutually beneficial; Games gained access to the Spies' extensive collection of dossiers and information-gathering technology and Solis began his relationship with Dominic Marijuana prior to his incineration.

Games's time with the Spies was met with great enthusiasm. Her trademark "Valentine Triples" and solid defense helped the Spies become quite a formidable team during Season Eight. Off the Blaseball diamond, Games's natural curiosity also made them a prized spy. His dedication to seeking answers for the great mysteries of the world made them a natural choice for spywork, as well as their ability to redact documents to great poetic effect. Games also showed a distinct capability to find the strange, esoteric truth at the heart of things, opening up more mysteries for the Spies to explore as often as she turned up concrete evidence.

However, Games's deeper eccentricities were sometimes at odds with their spying ability. They had a tendency to speculate aloud, and would routinely walk away from assignments to pursue whatever whim the wind brought them.

Regardless of their performance as a spy, Games rapidly became the face of the Spies. His batting ability, effortless style, and unique personality made them a perfect fit for the spotlight — she became "The Spy of Love," the trenchcoat-clad wanderer with a artist's heart. The Spies' propaganda division encouraged Games to lean hard into this identity, including asking him to kiss the bat before each hit. Games was willing to play her part, earning the affection of numerous fans in the Spies as well as other teams. During interviews, Games often suggested their acceptance that Blaseball was where they belonged. She is quoted as saying, "Well... this is what I have to do. I go where the wind takes me, and the wind takes me to new places pretty frequently, so. I'm a spy now, in some sense."

But Games's wandering soul couldn't be content with just one team. Eager to investigate the strange phenomenon of the Flickering then-Unlimited Tacos player NaN, the Spies arranged a swap to make use of NaN's Flickering and the Feedback weather of Season 9, Day 6. Games volunteered to take NaN's place; Los Angeli was an interesting phenomenon, one she'd like to see for herself, and the sea called to him once again.

Though Games has left the Spies, his presence is still felt—blackout poetry adorns the walls of Spies HQ, Comfort Septemberish has taken up collage art from advertisements, and Math Velazquez has devised Math's own form of poetry with graphing calculators and sine waves.

Time with the Unlimited Tacos

Upon arrival in the rifts of Los Angeli following the Feedback swap, reports have come back fuzzy, with all firsthand accounts varying and surveillance camera footage completely glitching.

Because of this, little has been uncovered about Games post-Feedback to the Tacos. He has furthered this by denying to make any comment on his personal relationships with teammates, although, from her recently published blackout poetry, it appears she is beginning to grow fond of the team’s sense of family, and has begun to slowly reveal parts of their life in regards to previous travels.

Time with the Hawaiʻi Fridays

After nearly five seasons with the LA Unlimited Tacos, Valentine Games joined the Hawaiʻi Fridays as a result of the Season 14 elections. The Fridays adapted to Games’ star power with unusual speed, placing them at the center of a quickly improving section of the lineup called “Vibes Row” by Fans. It took some time for Games to adjust to the overwhelmingly laid-back nature of the Fridays, but he fell into his role as the Friday’s star slugger and would eventually become a mentor to newer batters on the team.

Some credit Games' growing warmth for the team to her close friendship with Beck Whitney, another offensive powerhouse who joined the Fridays at the same election. Both new to the concept of island time, the pair would regularly be seen conversing after games at the Fridays’ cookouts before joining the festivities, and would practice together whenever possible. Games seemed to be most comfortable in Whitneyʻs presence, and nobody was more supportive during Games’ rise to MVP status.

Games was regularly in contention for the top MVP spots during the Expansion Era. Following the first Vaulting, Games knew that his days with the Fridays - and the ILB - were numbered. Reasonable but unflappable, Games remained a star player for the Fridays, helping bring the team to the ILB Championships against her old team, the Tacos, in Season 17.

After leading the Fridays to an all-time great Season 19 - which was, correspondingly, one of the Fridays’ worst seasons due to the Turntables decree - Games was vaulted following Day 99. Their final game, at the Meadow in Kansas City, was attended by fans from all her previous teams in a sendoff match. Games hit only once in their final game with the Fridays, with a solo home run that was slam-dunked for a second point by Beck Whitney.