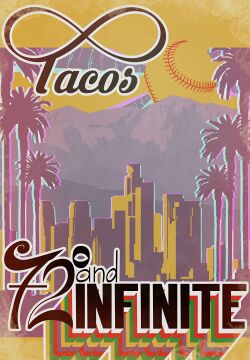 It is a day. To blaseball fans, it is specifically Day 73 of Season 3. In the capitalistic Los Angeles, the city grinds on and on. Rent is high, pay is low, and an underdog blaseball team struggles to get by. The people wish for better, hope for a day where they will struggle no more. A radical change is needed to free them, but who will bring about this change?

The Unlimited Tacos answer the call. Perhaps unwillingly, but while this change was unpredictable, it has been the change that Los Angeles needed.

Los Angeli is born from blaseball.

Once the capitalistic city of Los Angeles, now the Infinite, Unlimited cities of Los Angeli. Somewhere in California, probably where Los Angeles used to be, though no longer on the current plane of existence due to the fact that it is infinite.

Los Angeli was created by The Grand Unslam. Tearing a hole into spacetime, pitcher Wyatt Dovenpart saved the people of Los Angeles from the capitalist grind by creating an unlimited, infinite number of cities, now named the Los Angeli. In this creation exists every possible reality and form of Los Angeles.

In response to the creation of this post-scarcity unlimited Los Angeli, the people voted that they would like to Eat the Rich. Blaseball, and Los Angeli, complied, and a season's feast takes place every Sunday to ensure that capitalism does not rise again to destroy their cities. The few known capitalists, such as Albert "Al" Pastor and Alternate Reality Vito Kravitz, now satisfy their need for capitalism with fake money and used cars. 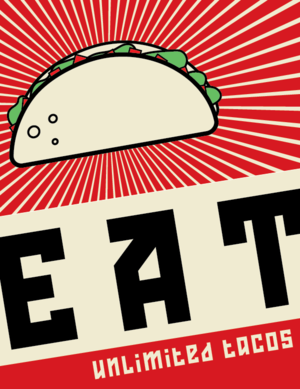 Though they have united under anti-capitalism and their love of blaseball, every unlimited version of Los Angeli is just as similar and just as different as the next. The possibilities are endless, and so are the resources. In this post-scarcity world, the people are unafraid of ever running out of the things they need to live. Money is useless. Love is paramount.

However, you cannot take the Californian out of the infinite space-time phenomena that is Los Angeli. The love of food (EAT), art, and good times are consistent across all cities. The Unlimited Beaches which stretch into Infinity are a popular place for the young people of Los Angeli, and the Forever Boardwalk is a nice walk if you have a few days or years to spare.

As always, everything is still 20 minutes away, if you really want it to be.

Since the Grand Unslam, the now renamed Unlimited Tacos are a well-loved fan favorite, despite their not-so-impressive win rate. The peoples of Los Angeli love to cheer on their Taco Team and show support with Tacoganda. They welcome other teams to the infinite home cities with open arms, and sometimes, these guests are unable to leave.

A common question asked by visitors is, "Why Unlimited Tacos?" The answers vary, but it's usually not hard to guess that it has something to do with the fact that the tacos in Los Angeli are, in fact, unlimited. And really good. Have you tried them? Delicious.

In the face of infinite cities, Los Angeles’ old public transportation system could not keep up. To make up for this, the Really Big Uber was created. Contrary to it’s name and the association with the now-eaten Uber company, the Really Big Uber is a fully socialist, fully unionized, and free train system that spans the entire cities. It, much like Los Angeli, is infinite and unlimited, and probably sentient in some way.

The Really Big Uber, or TRBU, consists of small train cars that merge into larger train cars, which can break through space-time and emerge into the regular plane of existence. They can also travel between all versions and variations of Los Angeli, so sometimes there will be similar versions of the same person on a single car.

It’s okay if it’s a little confusing. We’re here to help you out!

In addition to the various flora and fauna native to the various Los Angeli, previously unseen creatures known as Scuttles began appearing among the infinite cities approximately a year after the Unslam.