LegendaryThis Player is Legendary.
PerkThis Player has been rewarded Percolated energy. They will Overperform in all Coffee weathers.
See also: Glossary
ReturnedAt the end of each season, this Player has a chance of being called back to the Void.
See also: Glossary
Triple ThreatThis pitcher's strikeouts score Unruns when there are 3 runners on base, a runner on 3rd, or 3 Balls in the count. Each condition met is worth .3 Unruns. At the end of the 3rd Inning, there's a 33.33% chance that this mod will disappear.

The Avatar: It/Its, The Village: We/They

Member of the Blaseball
Community Hall of Fame

Sutton Bishop is a player in the Shadows for the Boston Flowers, and has been with the team since the Season 23 elections. Bishop had previously played for the Hellmouth Sunbeams, and also played for both the Rising Stars and Vault Legends during the ILB Semi-Centennial.

Bishop joined the ILB as a lineup player for the Hellmouth Sunbeams on Season 5, Day 91 after the incineration of Emmett Internet.

During the Season 6 elections the Sunbeams received the Move the Mounds Closer blessing and benefited from the Sharing Signs blessing the Boston Flowers received. This did not affect Bishop's star rating.

During the Season 9 elections the Hellmouth Sunbeams received the Mutually Arising blessing, which increased Bishop's defense from to .

During the Season 10 elections the Sunbeams benefited from the Sharing Signs blessing the Unlimited Tacos received, which increased Bishop's batting to .

During the Coffee Cup, Bishop played for Inter Xpresso as a pitcher. Bishop received the Perk modification after the tournament due to being a member of the winning team.

On Season 13, Day 98, Bishop was incinerated and replaced by Kaj Statter Jr.

On Season 23, Day 99, Bishop was named an MVP and gained the Ego+ modification.

During the ILB Semi-Centennial, Bishop played as a pitcher for the Rising Stars, until they were collected and made Legendary by the Vault Legends.

Bishop was traded to the Boston Flowers in exchange for Glabe Moon during the Season 23 elections via the Season 23: Vault Swap blessing, becoming a lineup player in the process.

On Season 24, Day 43, Bishop retreated to the Flowers' Shadows in exchange for Jada Frederick at Boston Garden via the Ratified Voicemail.

Sutton Bishop, the player, is the only way the inhabitants of Bishop Sutton can interact with the outside world. It's a goose. It's absolutely ripped. And it only has one setting: Blaseball.

Bishop Sutton (grid reference ST587597) was a small village within the Chew Valley in Somerset. It lay east of Chew Valley Lake and north east of the Mendip Hills, approximately ten miles south of Bristol on the A368, Weston-super-Mare to Bath road. Bishop Sutton and the neighbouring village of Stowey formed the civil parish of Stowey Sutton until THE SUMMONING occurred.

Following on from THE SUMMONING, Bishop Sutton is now a small village located within a quaint British pocket dimension. There is no known way to enter or exit Bishop Sutton. The neighbouring village of Stowey is now confused, but will get over the loss with time.

They played for the Hellmouth Sunbeams through Sutton Bishop, a shape-shifting construct with a cricket bat.

During a local bly-election, the people of Bishop Sutton found themselves inexplicably voting for an alternative option on their ballot paper known as "THE SUMMONING" the results were as follows:

Immediately after the count, the village and all of its inhabitants found themselves transported into a pocket dimension, where all roads led back to the village itself. When this even happened is down to debate, as no one can remember a time before THE SUMMONING.

Since THE SUMMONING, no human being has been able to leave Bishop Sutton, regardless of how hard they try—but the village elders wonder why anyone would actually want to leave, as Bishop Sutton is absolutely lovely, has won Village of The Year on several occasions in the past, and is a contender for this year's Britain in Bloom competition.

The Sun, taking pity on the now lost village, created an avatar for them to control known as Sutton Bishop. The Sun searched the village to build an entity strong enough to be imbued with the wishes of every villager; it looked at the people, the animals, the plants and the buildings of Bishop Sutton for inspiration.

The power of The Sun coupled with the strange desires of the people of Bishop Sutton produced the quasi-shape-shifting avatar known as Sutton Bishop. A mysterious psychic connection was made between the avatar and the local pub The Hellmouth that allowed anyone within the pub to have some control over Bishop (providing they were over the legal drinking age).

During the events of Emmett Internet's incineration, a minor hellmouth opened in the basement of the pub, connecting the village to the outside world for the first time since THE SUMMONING. The minor hellmouth was just the right size to allow Bishop to escape the village into the real world. Bishop arrived on the field shortly after the incineration. Some technical difficulties were had due to the strange reverberations of the new minor Hellmouth opening in the vicinity of the Bishop Sutton Hellmouth Pub, resulting in the confusion of fans and villagers alike as the new Bishop took up their bat for the Sunbeams.

Shortly after Bishop joined the team, Sunbeams pitcher Sandoval Crossing offered to have the avatar move in with them. The pair became roommates and grew quite close. The avatar spent most of its free time on the ball field, within Sigmund Castillo's walls, or hanging out with Crossing at their home in Hellmouth. 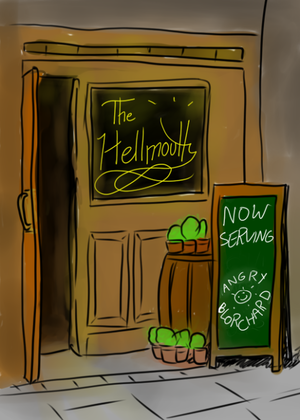 The Hellmouth pub in Bishop Sutton, serving up Beverage. By Dottie.

Pub-goers were able to watch the antics of Sutton Bishop via a small, cheap box TV with dodgy satellite reception. The collective mood and energy of the crowd of Blaseball watchers drove Bishop, directing their movements and actions, though the avatar inside occasionally fought back and went off to do their own thing.

Strangely, the Bishop Sutton Model Village and Tea Gardens does not have a model of The Hellmouth Pub where The Hellmouth Pub should be, instead it has some kind of dark, foreboding smear that gives you a headache if you look at it for too long.

The Mechanics of Sutton Bishop

Sutton Bishop's behaviour varied wildly depending on which villagers were currently in the pub, how drunk they were, and whether or not the avatar's brain inside Bishop's shape-shifting body had assumed direct control.

When controlled by the villagers, Sutton Bishop tended to be a reasonably decent creature. But due to the differing opinions of the people controlling them, they would wildly swing between different choices, moods and opinions.

When controlled by the avatar, the entity known as Sutton Bishop was referred to as "it" or "that horrible thing" by those around it. The change in personality was dramatic and terrifying, as Bishop gave into the beast within. In this state Sutton Bishop was extremely unpredictable, often reverting to a goose-like form, stealing objects, honking loudly, and mutating into unspeakable shapes of feathery terror.

There are those who have asked if the avatar of Sutton Bishop has a gender. It does. It has your gender. It took it when you were not looking and ran off with it. You can never catch it now.

Bishop was incinerated in extra innings on Season 13, Day 98, following the incineration of Breckenridge Jazz Hands hitter Combs Estes in the same game. This was the second double incineration in a game between the Jazz Hands and Sunbeams. The game ended one out after Bishop's death.

After the loss of Bishop, the Sunbeams have often been seen wearing white feathers to commemorate their teammate. Sandoval Crossing has been quoted as saying that Hellmouth "isn't the same" without the presence of "that horrible goose". Bishop is remembered in many ways around the league. A spot is always left open for it in the Randall Marijuana Memorial Cat Café, and it has a pond dedicated to its memory in the Augusta Chadwell Memorial Park and Promenade. Multiple teams have held on to the anti-goose protection spray gifted to them by the Sunbeams, not willing to let it go just yet.

The Many Fates of Bishop Sutton

Rumours about what happened to the village of Bishop Sutton after the incineration of Sutton Bishop vary, and are collected in the following IRM. The IRM randomly chooses one backstory of many written by the Blaseball community when the page is loaded. This time, the Interdimensional Rumor Mill reveals a Rumor from IF-59.434 out of its Rumor Registry...

After the incineration of Sutton Bishop the Sunbeams received a letter from the town of Bishop Sutton, delivered to them at the Pocket by Kaj Statter Jr.. It was written in a messy scrawl, on the back of a receipt for a pint at the Hellmouth Pub. A recreation of this letter is published here.

Sunbeams,
With the death of our friend, whatever strange force trapped us here appears to have taken pity. The boundaries of our prison are shaking - the world we remember is starting to shine through. No matter what happens [here the sentence stops abruptly].

Thank you for everything.

When the Sunbeams returned to Hellmouth they heard tell that the town of Bishop Sutton had returned to the English countryside. With the help of Sigmund Castillo the team paid a visit to the home of their team members. Upon their arrival, reactions from the villagers were mixed. In later interviews, Bishop Sutton villagers recalled seeing a group of “strange people dressed in yellow” who “went to the village pond, found a goose, and cried”. Based on their confusion whenever anyone mentioned Blaseball, and insistence that the only splort they had played was Crlicket, it appears that the town of Bishop Sutton has no recollection of their time with Sutton Bishop.

Resurrection and Escape from the Vault

Sutton Bishop was resurrected to play in the Semi-Centennial on the Rising Stars before being collected and made Legendary.

When Bishop was incinerated the village of Bishop Sutton was freed from their fate, leaving Bishop controlled alone by the Avatar. Despite Bishop's resurrection the village has not been returned to their previous fate, and Bishop now sleeps during the time they aren't being controlled by the Avatar.

Time on the Boston Flowers

Chaos in the Garden

As usual, Sutton Bishop causes chaos wherever they go in the Garden. Members of the Flowers find it difficult to catch a glimpse of them, often hearing Ominous Honking Noises from the thick brush, or echoing through the vents in the Vault.

Although Bishop loves to terrorize everyone on the team, Margarito Nava has been a special target, by request of Margarito's cousin, and Bishop's former teammate, Nagomi Nava.

Bishop isn't the only chaotic member of the team, Lowe Forbes has reportedly been causing chaos alongside them, usually using Bishop as a distraction so Forbes can get up to their own antics.

Several warnings have been sent around and placed through the Garden, reminding everyone to keep an eye on their gardening equipment, lest it be stolen by Bishop.

What do you have? A Sword!

In reality, Frederick, who secretly holds a soft spot for the eldritch goose, deliberately forged for Bishop's use, and left the blade out in the opening unguarded where Bishop would easily be able to find and steal it.

The theft was followed by happy honking noises, and a minor general panic from members of the team. As of current reports no injuries have been suffered despite initial fears.

Bishop is not the only bird on the Flowers related to the eldritch, which has generated a one-sided rivalry. Wade Howe believes Bishop to be their rival and has publicly stated as much, Bishop however, is nonplussed and has yet to comment on the supposed rivalry.