People snooping in the Western Wing

Sigmund Castillo is lineup player for the Dallas Steaks, and has been with the team since Season 2, Day 88. Castillo has previously played for the San Francisco Lovers, Hellmouth Sunbeams, Houston Spies, and Broken Ridge Jazz Hands.

Castillo joined the ILB as a lineup player for the San Francisco Lovers with the Return of Blaseball.

During the Season β2 elections the Lovers received the Performance Enhancing Demons blessing, which increased Castillo's overall rating by 8%.

On Season β6, Day 29, Castillo siphoned some of Breckenridge Jazz Hands lineup player Nagomi Mcdaniel's baserunning ability in a game with Blooddrain weather, increasing their own ability from to . On Season 6, Day 61, Castillo was exchanged to the Hellmouth Sunbeams due to Feedback. Castillo was replaced by Alexander Horne. During the Season β6 elections the Sunbeams received the Move the Mounds Closer blessing and benefited from the Sharing Signs blessing the Boston Flowers received, which increased Castillo's batting and pitching each by a star.

On Season β7, Day 37, Castillo's batting ability was siphoned by Miami Dale lineup player Murray Pony in a game with Blooddrain weather, decreasing it from to .

During the Season β10 elections the Sunbeams benefited from the Sharing Signs blessing the Unlimited Tacos received, which increased Castillo's batting to .

During the Coffee Cup, Castillo played for Cream & Sugar United as a pitcher.

On Season β12, Day 21, Castillo's defense ability was siphoned by LA Unlimited Tacos lineup player Halexandrey Walton in a game with Blooddrain weather, bringing it from to .

During the Season β13 elections the Sunbeams benefited from all four "Bubble" blessings, which increased Castillo's batting, baserunning, and defense by 4%.

During the Season β14 elections, Castillo retreated to the Shadows in exchange for Eugenia Bickle as a result of the Sunbeams' Foreshadow will, resulting in a combined 12.6 -> 13.3 stat increase.

During the Season β18 elections, Castillo's pitching increased from 3.6 -> 4.9 as a result of the Sunbeams' Shadow Infuse will.

During the Season β22 elections, Castillo gained the Negative modification as a result of the Rotation Flip blessing.

During the November 18, 2022 Fall Ball, Castillo fell to the Breckenridge Jazz Hands.

On Season 2, Day 81, Castillo was Cursed by a Bard Umpire during a Solar Eclipse (Gold) and gained the Can't Lose modification. At the conclusion of Day 83, Castillo began to move teams. Over the course of the season they joined the Houston Spies, Broken Ridge Jazz Hands, and Dallas Steaks.

Despite being a castle, Sigmund Castillo (they/them) is not particularly any better in the outfield than they are at bat, but they are a surprisingly fast blaserunner. After performing some demonic rituals, Castillo grew two arms, of which Lovers player Milo Brown says "[the arms] makes them way better at bat, and also at hugging during Cuddle Puddle Time, so I'm fine with it."

Knight Triumphant has lived in Castillo for as long as they can remember. Upon returning from their trip to the Hellmouth, Triumphant heard rumor that their childhood home had been taken over by the ruling class of San Francisco. When Triumphant and Theo King tried to engage in a siege of Castillo, the duo discovered that when they asked nicely, Castillo simply opened the gate and let them in. Upon entry, the two realized that Castillo was no longer an ordinary castle or harboring the feudal elite of San Francisco. Triumphant profusely apologized for the misunderstanding, which Castillo graciously accepted. The rest is, as they say, history.

Castillo's Western Wing has a group of individuals living in it - little is known about them, but Castillo warns visitors that entering the area is dangerous.

Move to the Hellmouth

On Day 61 of Season β6, during a feedback storm following a game between the Hellmouth Sunbeams and the San Francisco Lovers, a beam of light pierced the cloud cover over San Francisco, bathing the parapets of Sigmund Castillo in glorious light. It was then that Castillo was anointed as the King of Themself. As King Sigmund Castillo of Sigmund Castillo, they can be found just outside Hellmouth, welcoming all. However, a sign near the gate warns visitors that should they choose to leave Castillo's walls, they will not be protected from the surrounding Hellmouth. 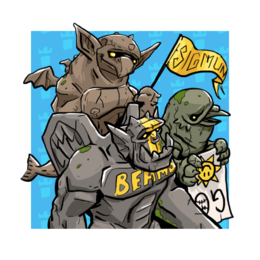 Castillo's gargoyles, manifested as part of Castillo's Adaptation.
by Coblin

On Castillo's arrival to the Hellmouth, they discovered some new residents within themselves. These Gargoyles, made of clay and shaped like pigeons, were friendly, and quickly introduced themselves to their King. They can often be found around the castle cleaning, doing repairs, or other general maintenance.

When asked as to why they cannot play blaseball, they point to two main factors: Firstly, that Sigmund Castillo is the signed Blaseball Player, not them. Secondly, they have their own league that they feel is far more important to focus on right now. Nevertheless, when games are going on that Castillo is playing, and they don’t have any Blittle league games occurring, they can often be found cheering on the parapets of Castillo. They particularly appreciate Castillo doing Crime.