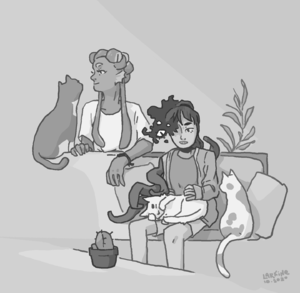 Hahn Fox and Nagomi Nava at the cat café. By larkine

The Randall Marijuana Memorial Cat Café was built to house Randall Marijuana's "singular" cat after his feedback to Breckenridge and subsequent incineration. Originally run by Alaynabella Hollywood, Nagomi Nava took over most duties, with additional assistance from Hahn Fox after Hollywood's transfer to the Boston Flowers.

As the safest and, as some customers have described, "mellowest" place in Hellmouth, it is also a popular place for fans and members of the Hellmouth Sunbeams to gather. On display within the Minecraft-themed café is Marijuana’s collection of Bionicle figures.

Cats currently available to meet at the café include Pepperjack Cheez-its, Artemis, and Clonk Fuzzball the Third. Following the Season β10 postseason and the blossoming "Hellennials" anti-rivalry, lucky visitors may also spot Millie the Bodega Cat worming her way across the café, in and out through a pair of cat flaps which mysteriously appeared on the skirting boards near the start of Season β11.

Randy's Cat Café is actually home to several cats, but Randy was too stoned to realize it. If you would like to see a list of all cats in the café, or give a new cat a home in the Café, click Randy's Cat Café. If you would like to edit this cat, click C-Frank. This system is based on the Interdimensional Rumor Mill, which can be read all about at Interdimensional Rumor Mill.

Frank is a demon that broke into Randy's house one day. When he realized Randy was sitting on the couch playing Minecraft, he sat down to watch. He's a small and four-legged demon, with triangular ears and short gray fur. Although he looks like a cat, Frank assures those around him he is in fact a demon. Randall has yet to notice.