Targeted Shame (Season 8, 10)Teams with Targeted Shame will start with negative runs the game after being shamed.
See also: Glossary
The Fourth Strike (Season 13)Those with the Fourth Strike will get an extra strike in each at bat.
Base Dealing (Season 13)This Team's lineup will advance in reverse order.
CharmPlayers with Charm have a chance of convincing their opponents to fail.
Charmed batters may willingly strike out and charmed pitchers may willingly walk a batter.
RoamlessPlayers cannot Roam to this Team.
ScatteredThis Player returned from Elsewhere a bit Scattered.
Under ReviewThis Team is Under Review...

The Concept of Rivalries 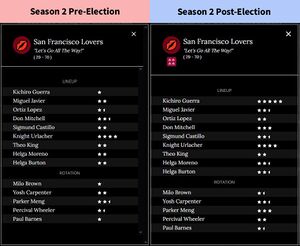 The Long Romantic Walk on the Blaseball Field (Season 2, Day 78)

Know more about the Lovers' history? Add it at San Francisco Lovers/History!

The San Francisco Lovers were founded due to the enthusiasm of their captain, Knight Triumphant—the only member of the original roster to have any previous Blaseball experience. The rest of the San Francisco Lovers original line-up for the team was sourced from Knight's expansive sprawling polyamorous relationships. The roster is currently made up of supportive partners, metamours, and allies eager to encourage Knight Triumphant to pursue their dreams.

Originally sponsored by Miguel Javier's Etsy store, the team ultimately decided to shun corporate sponsorship and are now instead sponsored by the feeling of seeing your partner again after having not seen them for a while. This sponsorship allowed the team to relocate to their current stadium, The PolyHedron.