Blimp Hardison is a lineup player for the San Francisco Lovers, and has been with the team since the Season 20 Endseason.

Hardison joined the ILB as a player in the Shadows for the San Francisco Lovers as the Lovers' Season 20 Underbracket Playoff Birth.

On Season 22, Day 50, Hardison joined the Lovers' lineup in exchange for Foxy Pebble at San Franstadium via the Ratified Voicemail.

Colloquially known as ‘Blimp Hardison’ (collective they/them), this air vessel was originally hired by the Blaseball News Network for capturing aerial views of live splorting events for broadcast and advertising purposes. However, due to an unfortunate clerical error involving Hardison’s Blimp Aviation, Co.’s paperwork, the vessel was misfiled as a singular individual/blaseball player named ‘Blimp Hardison’. Despite protests from the crew, they resigned themselves to their inevitable fate, joining the San Francisco Lovers’ line-up.

Strangely enough, every crew member of the vessel’s name appears to be Hardison. When asked about it, the various Hardisons couldn’t seem to recall if that was always the case or not. To minimize confusion onboard the blimp each Hardison has taken a designated call sign based on a prominent feature of their appearance, their designation, or their job title.

The vessel, simply known as ‘Blimp’ was designed using a hybrid of magic and technology, appropriately called ‘magitech’. Blimp is a non-rigid (meaning its shape is not maintained by a rigid internal structure) dirigible (directable/steerable airships). Inside its exterior envelope, the vessel is fitted with air–filled ballonets and ‘love blood’. As Blimp ascends or descends, the internal ballonets, using magitech, expand or contract to compensate for eDensity changes and to maintain uniform pressure in the envelope. The eDensity is maintained under low pressure, so small punctures do not pose serious consequences for the vessel. One inspection element of the vessel is to look into the envelope for pinpoints of light which are indicative of small holes.

Many individuals make up the crew of Blimp, below is one such crewmember.
This time, the Interdimensional Rumor Mill reveals a Crew Manifest from IF-23.57 out of its Crew Manifest Registry... 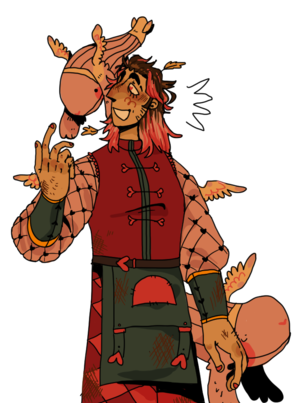 The Squire and the Blimps.

The Squire, a conservationist and biologist at heart, is one of the newest crew members of the Blimp. A tall gangly man with a slightly faded mullet, ve is constantly seen with a smile on his face and dirt and straw covering veir uniform. Regarded as plain and unforgettable, he is most known around the San Francisco area for the flock of Blimps, small creatures that resemble their fully grown counterparts, that fly close behind vem. Capybara like in nature, most of the crew know the small animals more than the one in charge of them.

The Squire grew up around the farms of the San Francisco Larp. Though ve spent most of his time studying and preparing for a more academic life, vey were instilled with a love for all life, particularly the chickens around the Paul Barnes Farm. In his first year of college while ve was studying for a Biology test, he discovered a long forgotten book on the habitat and life of an endangered and rare species; the Blimp. So burnt out on unfulfilling academic life, ve left college behind him and set out to dedicate veirself to helping the Blimps.

Moving back home with what little money he had, The Squire was ecstatic to discover the LARP they loved so much had a team dedicated to the small animals ve wanted to help so badly. He quickly signed up for the Hardison Crew, saddened to discover they meant the dirigibles inspired by the Blimps. Luckily, this sadness didn’t last very long as while ve were out tending to the flock of chickens at the nearby farm, the Squire spotted a certain King wandering the castle grounds with a particular pet.

With a small pink nose, those large floppy ears, the tiniest little wings that shouldn’t hold up such a round body, the distinctive markings, the Squire knew what he was seeing was the endangered animals ve was so in love with. A Blimp. After passionate pleads to the liege of the LARP (banging on King Roland’s door in the middle of the night), the lords of the land were so smitten by his message (Roland was tired) ve was promoted directly to Head Squire of the lands Blimps (Roland made this up) and ever since then, the Squire and veir flock of Blimps have been a constant sight on the Blimp Hardison.

The Squire, though initially wary of the main team, found himself embraced by it quickly after a particularly grueling game against the Pies. After slowly being overtaken by them in the last game in the series, at the bottom of the 9th with two outs ve hit the homerun to tie it all, with Sandford Garner throwing the last strikeout to win it all, as soon as the game was over the two were quickly embraced by the team as the stars of the game. The Squire quickly grew to view Garner as a father figure of sorts, following him in daily tasks (followed suit by the Blimps) and offering to do squire-ly things for him (what Roland would call chores). From their odd quiet relationship, The Squire slowly grew closer with the main team of Lovers, namely Mint Shupe who frequently can be seen trying to train the blimps to do science, Theo King who taught the squire numerous sewing techniques, and Tot Fox who naturally got along with the Blimps.