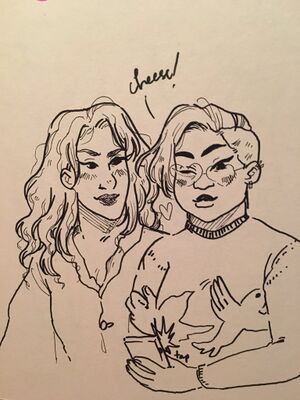 At the end of season 4, San Francisco Lovers Kichiro Guerra and Parker Meng switched places with their doubles in an alternate dimension, informally referred to in this world as the "Tough Love Dimension."

In the Tough Love Dimension, the Lovers grew out of a competitive blaseball game between two polycules, with Parker Meng as captain. They went on to dominate the Internet Blaseball League, winning three championships in the first four seasons. The Lovers are still a passionate and loving team formed around overlapping polycules, but they have a more competitive mindset and are less openly sentimental. The alternate Kichiro and Parker are frequently dismissive of frankly expressed sentiment

Other known facts about the Tough Love dimension: