Umpires are entities charged with the enforcement of the rules of Blaseball. This refers both to the abstract and nameless umpires that Blaseball teams interact with inside of games, as well as the named umpires who speak to all Blaseball fans via the internet.

Umpires observe games to ensure appropriate play and splortsmanship, and relay the word of the Blaseball Gods to the rest of the League.

Their secondary purpose is to declare a Siesta, during which the games will not be viewable, and improvements (such as the addition of bigger machines) can be made.

The origin and species of Umpires are unknown.

Named umpires are an informal designation for league officials who communicate with Blaseball fans via the internet, and are present during the events of every season. These umpires will occasionally declare a Siesta, during which the games will not be viewable and improvements (such as the addition of bigger machines) can be made. The named umpires are occasionally found speaking with fans in the Blaseball Discord.

Named umpires in the active category are characters representing one of Blaseball's game designers at The Game Band. Raúl, a fictional character whose presence was brought up as a response to Raúl Leal's use of the Iffey Jr. during Season β9, was the first non-developer named umpire.

Generic umpires are an informal designation for umpires who are present in every single match of Blaseball, arbitrating rules and adjudicating the game. Generic umpires have not done anything of historical note, but their presence in every match seems to be necessary; either by rulebook or by divine law. 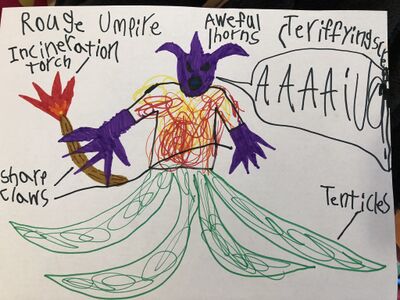 See the main article on this topic: Incineration

Upon the Opening of the Forbidden Book at the end of Season β1, umpires were described as having their "eyes turn white." From this point forward, some games featured a rogue umpire who has the ability to incinerate a Blaseball player at will. It is believed that the practice is not endorsed by Internet League Blaseball, although no umpires have ever been publicly criticized or punished by the League for harming players.

It has been observed that all incinerations (and subsequently, all rogue umpires) only appear during Solar Eclipse weather. After the ILB Semi-Centennial and during Season 24, Rogue Umpires had the ability to also incinerate entire teams during Supernova Eclipse weather.

See the main article on this topic: Crew of Umpires

A group of 4 Umpires that appeared after the Season 1 elections and the re-opening of the Forbidden Book. Each appears to correspond to a different division in the League. It was revealed during Season 2 that the crew of Umpires consists of the Bard Umpire, Knight Umpire, Mage Umpire, and Rogue Umpire. The crew of Umpires appeared to review play and herald a Tournament of Champions to choose a new Ace to lead the League.