Every Third Championship a Team wins will cause the Team and its Players to Evolve. Players that round the phylogenic Bases will get to go Home.

Evolution was a League Modification (or Rule) first implemented in the Season 12 elections with the passing of the Based Evolution Decree, stating that "Every Third Championship a Team wins will cause the Team and its Players to Evolve. Players that round the phylogenic Bases will get to go Home."

Evolved Teams gain a special customized team Modification, while evolved players gain a protected star in each category and an additional item slot.

In the Season 12 elections, Based Evolution was offered as one of three possible Decrees the community could vote on to go into effect, alongside the following:

Based Evolution passed with 247,049 Votes, 53% of all Decree Votes, alongside the following message:

For every third Internet Series championship a team wins, each player on that team's current active roster (i.e. not including Shadows) advances by a single evolutionary "base" (the first evolution being from "Base" to "Base 1"), and the team is granted a unique permanent modification thematically related to the specific team. Player evolution is a one-off effect – unevolved players transferred to evolved teams will not evolve, and evolved players transferred to unevolved teams will retain their evolutionary level.

If a player has the Base 1 evolution, their first star in each category is protected, indicated by that star turning gold and gaining a circle around it. The player then can never have their stars reduced below that level, meaning Base 1 players will always have at least one star in each stat category. As of the introduction of the Items tab at the end of Season 15, evolved players also unlock a number of additional item slots corresponding to their evolution – for example, Base 1 players have two available item slots instead of one. 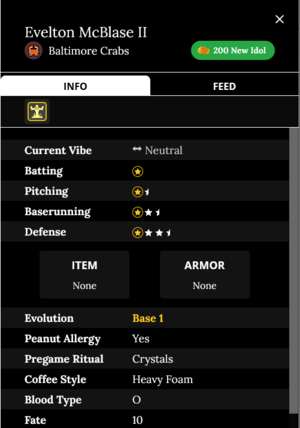 A screenshot of Evelton McBlase II with the Base 1 evolution.

Players have been able evolve without their team on several occasions due to blessings including:

A full list of players with Base 1 Evolution can be found here.

A full list of players with Base 2 Evolution can be found here.