The Earlsiesta is a mid-season break in play following the Day 27 games where a Tarot reading occurs. Earlsiestas began in Season 12.

Arcana were handed out as the blessings for Season 11. Each team received one card. Following the Descension, the Atlantis Georgias, Baltimore Crabs, Core Mechanics, and Ohio Worms were awarded the Fool card. 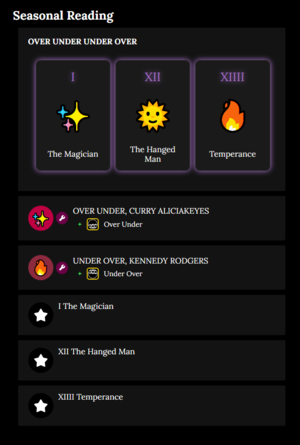 The Season 12 Earlsiesta readings are as follows:

The Season 13 Earlsiesta readings are as follows:

The Season 14 Earlsiesta readings are as follows:

The Tokyo Lift, corresponding to XI Strength, received the Receiver modification for Wyatt Quitter. Similarly, the Boston Flowers, corresponding to III The Empress, received the Receiver modification for Moses Mason. Fans have noted that both Wyatt Quitter and Moses Mason are survivors of the Wyatt Masoning. The arcana Fool corresponds to the Baltimore Crabs, the winners of Season 13, however, the emoji representing Fool appeared to change several times before the reading, sometimes showing the emojis for the Atlantis Georgias and Core Mechanics, but often showing the joystick emoji of Real Game Band, a team who only played during the inaugural Coffee Cup tournament.

The Season 15 Earlsiesta readings are as follows:

The Season 16 Earlsiesta readings are as follows:

The Season 17 Earlsiesta readings are as follows:

The Season 16 Champions, the Dallas Steaks, were once again not in the center position in the reading. The first was, for the second time in a row, XVI Tower, belonging to the Breckenridge Jazz Hands. Lineup player Baby Doyle was given the item Uncertain Necklace of Entanglement, which placed the modifications Entangled and Uncertain on them. The middle position was V The Hierophant, belonging to the Canada Moist Talkers. Nothing was granted to them. The final position, for the third season in a row, was IIII The Emperor, belonging to the Dallas Steaks. Their pitcher Orville Manco received the item Force Field of Observation, which granted them the modifications Force and Observed.

The Season 18 Earlsiesta readings are as follows:

The Season 19 Earlsiesta readings are as follows: