Elections are the process by which Blaseball Fans may enact change. The effects of the electoral process can be felt by Players and Fans alike, with consequences ranging from personal Arm Cannons to the wrath of the gods. The Glossary defines it as "A formal group decision-making process by which Fans spend Votes in exchange for divine favor."

100 coins. Each vote may be cast once, for either a Decree, a Will, or a Blessing. All Fans are granted unlimited electoral power, as there is no limit to the amount of Votes a Fan may purchase and cast.

The Election cycle starts on Monday at the start of a new Season. This is when the new Decrees and Blessings for that Season are revealed and opened for voting by the Fans. The cycle ends and voting is closed on Sunday, the Blaseball Gods Day, at 12 PM PST. At that time the results of that Election are revealed, displaying the two chosen Decrees and the winners of all the Gods' Blessings. All Election results can be seen on each Season page. 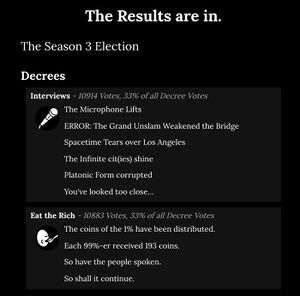 Decrees are large, wide-ranging changes to Internet League Blaseball rules, teams, or the world itself. Decrees are chosen by popular vote. The Decree(s) with the most votes are enacted at the end of that Election cycle.

Blessings are relatively smaller changes, affecting certain players or teams. They can include player randomizations, powerful Items or Modifications, team swaps, team or division-wide boosts, and more. Blessings are decided by lottery. Fans casting votes for a particular Blessing increase their team's chance of receiving that Blessing.

Wills are similar to Blessings, but with more control and interactivity, typically affecting individual players on a team. They can include team swaps, player boosts or randomizations, and teamwide changes. Each team gets two Wills, chosen randomly from the votes cast by that team's Fans. To access Wills, Fans must first purchase a Cheese Board.