The Immaterial Plane is the name of the plane on which Blaseball occurs. It was first referred to in the Season β1 Blaseball Beat. 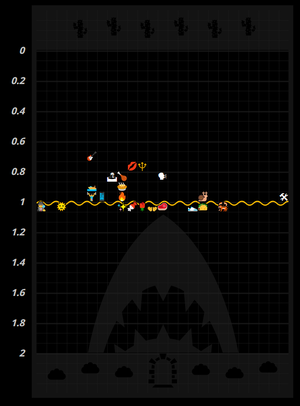 The Depth Chart as revealed in Season 20. Note the flipped locations of 0 and 2.

The Immaterial Plane is a flat, two-dimensional surface that comprises the universe of Blaseball. It is unknown how large it is horizontally, but it is bounded on its top end by Blaseball 2 and on its bottom end by Blaseball 0.[1] It has been seen visually in two separate ways: the Depth Chart and the Map.

See the main article on this topic: Levels#Depth Chart

The Depth Chart is a visualization of the Plane first provided in Season β20. Here, the plane is illustrated as a football field, with its graph bounded as -1 ≤ x ≤ 1 and 0 ≤ y ≤ 2. This graph is mostly intended to illustrate how Levels work - when a team sinks above[2] the MVP line at y = 1, they are at risk of Consumers. The x values on this visualization matter very little, as the only two locations illustrated on it are Blaseball 0 and Blaseball 2, and are reached by Teams based only on their y value.

See the main article on this topic: Map

The Map (seen at top of page) is a visualization of the Plane first provided in Season β24. This illustration is a square divided into four segments that serve as divisions, and its graph is bounded by -1 ≤ x ≤ 1 and -1 ≤ y ≤ 1. Teams could Navigate this map, and is notably different from the Depth Chart in that its x values mattered much more due to the addition of two new locations in Black Hole (Black Hole) and the Hall. Teams needed to match both their x and y value in order to reach a location on the Map.

It is unknown when the Immaterial Plane first formed, or if it has always existed. The first recorded instance of activity in it is in The First Day, Zeroth Edition.

During the Latesiesta of Season β12, the Coin flipped the Immaterial Plane with the following announcement:

From this announcement on out, the Immaterial Plane and its Depth Chart graph were reflected over its x-axis, placing Blaseball 0 at the top and Blaseball 2 at the bottom. However, this placement was not obvious until the unveiling of the Depth Chart in Season β20, and it took even longer to realize that it was flipped, as this was the first time that a visual of the Plane was provided.

Right before the Season β23 Election, the Plane was reflected back to its standard position:

EMERGENCY ALERT
EXECUTIVE ACTION
THE COIN FLIPS
OVER OVER
UNDER UNDER

It remained in its Depth Chart form until Season β24's Earlsiesta when the Map was unveiled. Following this, Teams could navigate the Plane under their own power for the remainder of the season, with the goal of reaching one of the corners of the Map. On Day 82 of the season, Black Hole (Black Hole) began to expand, eventually leading to the complete Nullification of the Plane, and with it, Blaseball itself.