(Redirected from The Big Leagues)

Blaseball 2 is a location first discovered during Season β11 as a result of the Ascension of the Baltimore Crabs the Season prior. On the Depth Chart, it is located at y = 2. It is connected to the Vault, but the specifics of the connection are unknown.

Blaseball 2 can be found at blaseball2.com. It is an expanse of clouds with a large, red gate at the center that, as of Season β21, has been smashed to unleash Pickled Herring.

In the December 15th, 2020 Inside a Blaseball stream, it was stated that the Shelled One is from Blaseball 2.[1]

The Big Leagues are a mysterious aspect of Blaseball 2. After Ascending, the Baltimore Crabs played in them, and after the Descension, the Atlantis Georgias, Core Mechanics, and Ohio Worms joined the Crabs in being Teams that likely used to play in the Big Leagues. Any specifics as to what play is like in the Big Leagues is unknown, with the exception of teams there being significantly more powerful than the Season β11 Crabs. 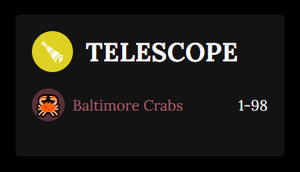 The Telescope seen during Season 11.

During Season β10, the Baltimore Crabs Ascended as a result of winning their third Championship. However, it was unknown where they went until partway through Season β11, where the Groundskeepers of the Discord server[2] (and later other Fans) discovered blaseball2.com, which at the time showed the Crabs' emoji behind a gate along with the 1-Blood Blagonball behind a cloud. Throughout Season 11, the Telescope widget on the Bulletin was visible, showing the Crabs losing every game except one while playing in the Big Leagues. 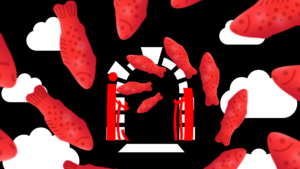 The gate after being smashed.

After the Descension in Season β12, the Crabs' emoji was removed from behind the gate of Blaseball 2. The website remained relatively inactive until the resurrection of Chorby Soul onto the Seattle Garages in Season β15, where upon the Garages hitting Level AAAAA, the red gate warped along with a tweet from Parker MacMillan IIIII asking about "that loud noise." Soul was once again resurrected onto the New York Millennials, causing another slam, further warping, and another concerned tweet.

The gate remained severely warped until Season β21, Day 75, in which the Ohio Worms utilized a combination of their Heavy-Handed Modification, a Chorby Soul Replica, and the partnership of two Uncle Plasma and Liquid Friend Replicas in order to reach y = 2 on the Depth Chart. Upon hitting Level AAAAA, the gate at Blaseball 2 finally broke, unleashing Pickled Herring upon the league. Using Herring, Fans could unredact redacted Feed items.