From Blaseball Wiki
This page is about the snack and object. For other uses, see Peanut.
Stub
This article is a stub. You can help by expanding it with updated information or additional lore. See the Style Guide for more on writing articles. 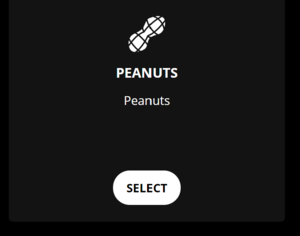 The decree as it appeared during Season 2 elections.

"EVERYTHING IS PEANUTS."
—Blaseball Ticker, Season 3.

Peanuts are an item available to Blaseball participants, as well as a major element of the game during the events of Season 3, such as a game-changing incident, a weather type, a player hazard, and more.

Currently, eating peanuts seems to have no observable effect. However, it seems that the item had an important hidden effect previously, if not more hidden effects to this day.

Peanuts were first introduced as a Season 2 decree that was available to be voted on, called Peanuts, with a description that simply said, "Peanuts." This decree won the election with 36% of the vote, and announcement of the decree's victory immediately caused the Peanut Plague[1], a Blaseball-wide event that had permanent consequences on the game. (This ominous event is similar to Season 1's Open The Forbidden Book decree.)

Starting at Day 1 of Season 3, participants were able to purchase peanuts at the Shop. The peanuts were tracked with an inventory icon, exactly like coins and vote tickets. Initially, the price of peanuts were a value & quantity that changed throughout the day, and always at a 1:1 ratio, such as 1 peanut for 1 coin, or 2 peanuts for 2 coins. In Season 9 you can buy 1000 peanuts for 1000 coins.

Participants can "use" peanuts by clicking on them, and presumably consuming them, with dialogue text such as "CRACK IT OPEN NOW." The peanut icon will fly out and crack across the participants' Blaseball monitor.

It is unclear what the effect of consuming a peanut is, since there is no immediately observable effect. However, prior to the Blasphemy event, the Blaseball ticker did display a seemingly accurate count, with a message such as:

This indicates that all peanut consumption is probably recorded and is probably significant. Currently the peanut count is listed as "We have eaten -Infinity collective peanuts."

Negative quantities are also possible, such as the Shop offering -2 peanuts for -2 coins. This deducts peanuts from the participant's total (even beyond 0) and adds coins to their inventory. Initially, negative peanuts could also be "consumed" to gain coins, but this interaction was removed after the Blasphemy event, during which the umpires accused some participants of "Peanut Fraud"—hacking or otherwise taking advantage of the Blaseball system in order to hoard an ungodly number of coins.

See the main article on this topic: Squirrel of Devouring

Starting at Day 1 of Season 3, participants were able to purchase a Squirrel of Devouring at the Shop for 200 coins. The item description states: "Recruit a Peanut-hungry squirrel to your side, to help you eat Peanuts faster." Each squirrel purchased increases peanut consumption by one per click, allowing 2 or more peanuts to be consumed per click.

See the main article on this topic: Peanuts (weather)

Starting at the opening pitch of Season 3, many matches took place in a new weather condition called "Peanuts." During this weather condition, players can "swallow a stray peanut"[2] and have a yummy or allergic reaction that provides a corresponding attribute boost. Fans have theorized that during a game played in Peanuts weather, peanuts continuously rain from the sky and pelt the blaseball players.

Blaseball peanuts, when falling from the sky as weather, provide ample opportunity for our non-human players to take a mini-break and consume a delightfully nutty snack. Fans in the stands are more likely to be pummeled by these infinity-shaped nuggets; perhaps peanut butter will form and we'll all have a gooey pick-me-up.

The introduction of peanuts caused a period of turmoil in the Blaseball economy, leading to the Peanut Fraud, and subsequently the Blasphemy incident.

Early in Season 3, Blaseball officials announced that "THERE ARE PEANUT CHEATERS AMONG US," and "THE SITE WILL NOT RETURN UNTIL THE PEANUT CHEATERS HAVE REPENTED." This began a brief yet unexpected period in which participants were unable to watch or bet on Blaseball games. Officials further demanded that the "CHEATERS [MUST] CONFESS" or else the "SITE WILL NOT RETURN."

Though the alleged cheaters did not come forward, the Blaseball games returned regardless, with officials citing that "BLASEBALL IS INEVITABLE."

23 minutes later, the officials announced: "MORE PEANUT CHEATERS. GOODBYE" and once again removed access to Blaseball games, instead replacing it with Blasphemy. 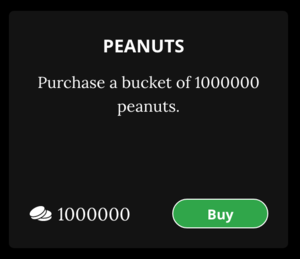 Peanuts at their new punitive price

After the Blasphemy incident, peanuts were no longer available to purchase in the small, varying amounts observed earlier. Instead, the listing in the shop stated: "Purchase a bucket of 1000000 peanuts," with a price of 1000000 Coins, making them by far the most expensive item to date, and virtually unattainable. There has been no known records of any participant to successfully and legitimately purchase the bucket of peanuts.

Many fans lamented this as pulling all Blaseball players and participants further away from "atonement."

Upon enactment of the decree at the end of Season 2, all players named Dan or Daniel had the "Dan" in their names replaced with "Peanut." There were no other apparent changes to these players, star rating or otherwise. The players affected were:

Fans have debated if these alterations to Blaseball players truly counts as "punishment," although it is reasonable to assume that the former-Dans do consider it to be some form of punishment.

With the addition of the Idols Leaderboard in Season 6, it was discovered that these three players were immune to being Shelled. In Season 7, all three were above the dotted red line and received the Honey Roasted modification.

Peanuts are explicitly mentioned in article 5.e. of The Forbidden Book[3], suggesting that if all fans consumed "one million Peanuts," they could "atone" for the sin of opening The Forbidden Book. In Season 2, the text in the Book read:

In Season 4, that fan theory was confirmed. The full text of article 5.e. was revealed, yet crossed out. It currently reads:

e. If at any time the Fans have angered the Blaseball Gods, they may atone by eating one million Peanuts. STRIKE TWO

It's unclear if eating one million peanuts would still produce any effect.

Currently, a bucket of 1000 peanuts can be purchased in the Shop for 1000 coins. These can be eaten, or they may be used to "pay tribute" to a player in the Hall of Flame. The Hall currently ranks players based on how many peanuts have been paid as tribute. One peanut can also be spent to "Upshell" an event on the Feed.