Constantly spinning and illuminated
Speaks in speech bubbles
This page is about the entity appearing in Gamma 3. For the Discipline Era entity, see The Shelled One.

A Shelled One[1], also referred to as The Shelled One and Shelled .1, is an entity first appearing in Gamma 3 as a tutorial agent. They have also appeared in the Short Circuits, and are the patron of the Ohio Peanuts. Their relationship to The Shelled One, if any, is unclear.

During Gamma 3 A Shelled One hosted the newly introduced Tutorial feature, which guided new or existing players through the process of choosing a Team, Betting, and Voting. A Shelled Ones opens the Tutorial by saying:

In the Gamma 3 Midseason Elections a new Distortion named "TASTE THE INFINITE", promising to "Remake your Team in the Shelled One's image", became available. Following this, an email titled GO VOTE! GO NUTS![2] was released by The Game Band, stating that:

In Politics, a surprise Ballot measure has seen Votes pouring in for a chance to Taste the Infinite, with Fans wearing their devotion to the Shelled One as a Badge of honor.

Attached to the email was a GIF of a peanut filling up whilst listing milestones on the side. A subset of fans interpreted the largest number (888,888) as a target number of votes to be invested into the TASTE THE INFINITE Distortion.[3] This was supported by a widget added to the Blaseball.com home page displaying the total number of votes contributed into the Distortion. Additionally, any fan who contributed to TASTE THE INFINITE Distortion received a Peanut Badge. 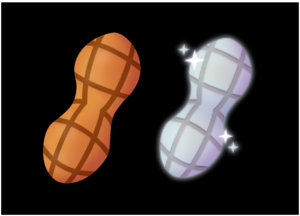 In the Midseason Elections, the Ohio Worms won the TASTE THE INFINITE Distortion with 4% of its total 322,619 Votes, outvoting the LA Unlimited Tacos who had 17% of the total Votes. As a result, the Worms became the Ohio Peanuts, gained the  Honey RoastedThis Team or Player has been Honey-Roasted.
Honey-Roasted players on Crunchy teams perform 100% better with 200% power. Honey-Roasted players may shell an opposing player in Peanuts weather. Modification, and received a red slogan. A Shelled One then appeared to reveal the winner.

I AM THE SNACK
I AM INFINITE
MY PROGENY
A TEST OF METTLE
YOU WIELD YOUR INFLUENCE
YOU SHOW FAVOR
300,000?
WOW
WOWWW
A HALF-MEASURE
NOT QUITE GOLDEN
BUT A GOOD EFFORT
PARTICIPATION WORTHY OF REWARD
I AM BENEVOLENT
I OFFER FLAVOR
A FEAST FOR WORMS
OH, YES

Following this, any fan who had previously possessed the Peanut Badge was upgraded to a Silver Peanut Badge.

After the Ohio Peanuts were knocked out of the Gamma 3 Postseason, A Shelled One appeared to express their anger.

Following their absence after The Shelled One's defeat in Season 10, Yummy Reactions returned in Gamma 4 after New York Millennials player Loner Shelley was affected by one on Season 1, Day 39. After games ended for Day 39, A Shelled one appeared to comment on the event.[Note 1]