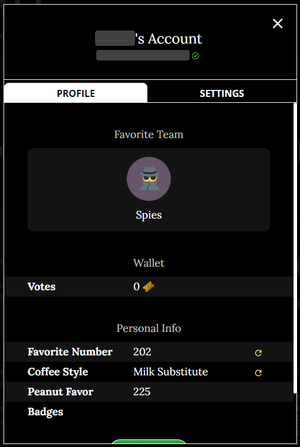 An example of the appearance of the typical Fan.

Fans are, as defined in the Glossary, any entity that observes and impacts Blaseball. Typically, this is used to refer to those with accounts on the website[1], but it is also completely inclusive of any being that meets the definition, including the Blaseball Gods.

Fans are, once again, any entity that observes and impacts Blaseball. Fans seem to have many abilities in order to affect Blaseball, such as Betting, choosing an Idol, and Voting. What is available when depends on the events of the Season, and it remains unclear just how many powers of account-holders are innate to being a Fan and, therefore, shared by the Gods. The only one confirmed is the ability to have an Idol, as demonstrated in An Exile by the Coin idolizing Parker MacMillan.

Similar to Players, Fans are able to have a Coffee Style. They also share the ability to have a special number with Players, although the specifics are different - Players have Fate which exists on a 0 to 99 scale, while Fans have a Favorite Number that ranges from 0 to 999.

Fans appear to have been involved in Blaseball since its inception, as the Forbidden Book and its signatures (and thus, the Gods) has existed since at the very least The First Day, Zeroth Edition. However, the ability to make accounts on the website began in Season 1, and only since then have Fans based out of an account been observing and impacting Blaseball. They have been active ever since.