(Redirected from The Microphone) 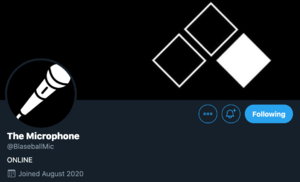 The Microphone is an entity that first appeared at the end of Season 3, and was first mentioned in the description of the Interviews decree.

The Season 3 elections saw the successful passing of the Interviews decree, which was described like so:

The first line is the first mention of The Microphone; a description that was especially cryptic at the time with no noticeable effect. However, past seasons have set the precedent that all of the descriptive text in a decree is meaningful.

On August 20, the official Blaseball account (@Blaseball) was found to be following an unknown Blaseball-related account, called The Microphone (@BlaseballMic). The Microphone was discovered to be posting cryptic messages suggesting it's a sentient entity that had recently come into existence (such as "hello?" "where am i?" "who am i?"). In the following days, the account tweeted: "I can see everything" and, "why can't they hear me" "it's me" "wyatts".

On the opening day of Season 4, The Microphone tweeted, "they don't know" "it's all happening".

Season 4 introduced a new weather condition called feedback: a word that may partially refer to audio feedback, such as from a microphone. During feedback weather, there is a chance reality will "flicker in the feedback"[2] and cause two players to permanently swap team membership.

On Day 105 the Wings had a record-setting 5 players made Unstable by pitches from Jaylen Hotdogfingers of the Seattle Garages. Upon the revelation that their game on Day 107 would again take place in Solar Eclipse weather, the looming possibility of multiple incinerations spread fear among the fans. Before that highly anticipated game began, The Microphone tweeted "focus wyatt" "help them" "anything is possible" "feed" "Focus" "WINGS" "WILD". Directly after this, the Commissioner tweeted "FEEDBACK DETECTED" and all instances of Mild Wings on the site had been changed back to Wild Wings. The fans rejoiced. Only one player, Miguel Wheeler, was ultimately incinerated on Day 107, and the Wild-again Wings went on to win that game and the Internet Series championship. 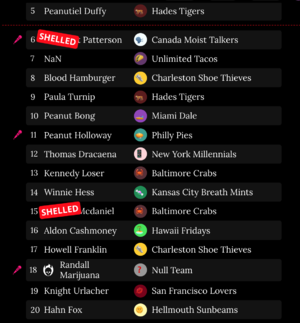 Screenshot of the Idol leaderboards before the opening games.

At the start of Season 8, the Idol leaderboard featured three Feedback microphone icons attached to the 6th, 11th, and 18th place rankings. At the end of the regular season, fans placed Jaylen Hotdogfingers, NaN, and Sixpack Dogwalker in these slots after following clues from The Microphone. After appearances by The Shelled One and The Monitor, the three idolized players gained a permanent version of the Flickering modification. NaN and Dogwalker also gained the permanent Receiver modification. Immediately after receiving the Receiver modification, the pregame rituals of NaN and Dogwalker changed three times in rapid succession:

Any information about the plan is currently unknown, but fans are monitoring NaN and Dogwalker for more messages from Wyatt Mason.

Several fans have speculated that The Microphone contains the voice of the original Wyatt Mason, based on The Microphone's sudden appearance as a direct reaction to The Unmasoning, as well as the account's mysterious use of the word "Wyatt."

According to some[citation needed], The Microphone has not seemed to speak with one consistent voice - instead speaking in various, heavily reverberating voices heavily reminiscent of many of Blaseball's announcers. Many debates have taken place as to whether The Microphone mimics voices spoken into its replicas, whether it captures a small fragment of the being of casters it finds worthy, or if these happen to be some sort of shared blaseball reverie. Some of the voices that have been reported as being utilized by The Microphone are:

It is speculated that the different fonts used by @BlaseballMic are meant to represent these various voices, but nothing conclusive has been determined to either confirm or deny this theory.