The Second Wyatt Masoning is the event that occurred during the Season 14 Latesiesta in which thirteen new Wyatt Masons joined the League. The new Wyatt Masons were pulled through the Rift and localized to the rosters of the teams that chose to build the PsychoAcoustics Ballpark renovation. Throughout the rest of Season 14, the majority of the new Masons Echoed each other into Static and ultimately vanished from the League.

This event is linked to the original Wyatt Masoning and is a keystone moment in the greater happenings related to Wyatt Mason and The Microphone. 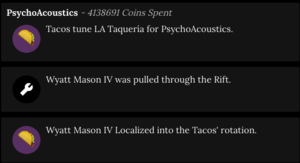 Wyatt Masons pulled through the Rift

Tune your Ballpark to a Localized Frequency to Echo your Opponents in Feedback and Reverb weather.

Thirteen teams chose to fund this renovation at the initial occurrence of the Latesiesta events. On the Latesiesta outcome page, each team that funded PsychoAcoustics had the following text:

Wyatt Mason [#] was pulled through the Rift.

Each of these thirteen teams gained a Wyatt Mason to their roster, differentiated with a roman numeral from II to XIII, with one unnumbered Wyatt Mason. The new Masons had randomized stats that did not match each other’s nor the original Wyatt Mason’s. All thirteen Masons shared the same pregame ritual “OFFLINE” and had a new modification Echo.

At the same time, a message appeared in the main Feed that read: OVER AND OUT. Simultaneously, the Twitter bio of The Microphone changed from ONLINE to OFFLINE. This is the first time the Mic has gone OFFLINE since the original Localization tweets during The Unmasoning.

After evidence of fraudulently funded Ballpark renovations[1] and manual adjustments by The Game Band, it was revealed that the Baltimore Crabs had also funded PsychoAcoustics but ultimately they did not receive a Wyatt Mason. When asked if the Crabs would now get a Wyatt Mason post adjustments, Umpire sun2man said “UNFORTUNATELY THEY DID NOT. WAS IMPOSSIBLE. OR MAYBE FORTUNATELY?”[2]

Throughout the rest of Season 14, the majority of the remaining Wyatt Masons Echoed each other, became Static and disappeared from the League.

On Season 14, Day 99, Wyatt Mason VI and Wyatt Quitter Echoed into Static. This is the first and only instance so far of a player other than one of the thirteen Wyatt Masons becoming Static.

At the end of Season 14, only two of the thirteen Wyatt Masons remain: Wyatt Mason IV on the Tacos and Wyatt Mason X on the Garages.