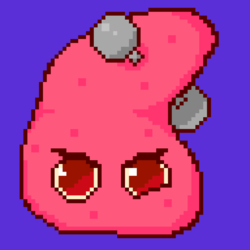 Lalengua, also known as "The Tongue", is the LA Unlimited Tacos' team announcer and an informal mascot. Lalengua uses the pronouns she/her. The ever-moist giant tongue with two googly eyes glued on to her has been with the team since Guy Myrington created the franchise. Lalengua announces the games via mass telepathy in languages native to her listeners. The reach of her telepathy does not seem to have limits, which is fortunate for the "unlimitedness" of the Tacos.

Lalengua performs play-by-play announcing and color commentary in two different "voices." Stadium fans have the option to listen to both at the same time, though fans have reported headaches and sometimes hallucinations, especially to populations that are sensitive to telepathy and communing with supernatural forces.

Lalengua was often outfitted as a Dilsney Princess during the team's previous stint with the company.

La Lengua decides who becomes the pitcher and hitters of the tacos team. When you first arrive, through whatever means, she descends from her announcer chair and lands upon the new tacos head with a ‘splat’. Her mind fuses with yours. You can suddenly hear every thought in the room as she, politely, discovers who you are, who you will be.

‘Hm,’ she says with her brain waves (dont ask where her brain is), ‘i am detecting a little saltiness. a bit of umami....PITCHER’. She lifts herself from you, floating away, leaving you drenched from your head to your shoulders, feeling bereft, lost, violated, even. And yet....you really, really want to pitch.