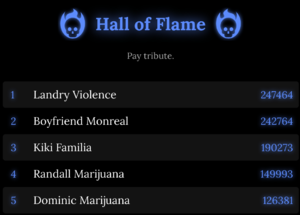 Screenshot of the Top 5 on Season 8, Day 0 (before the opening games).

The Hall of Flame is a leaderboard on the Blaseball website that lists every incinerated player. [1] Within Blaseball, the Hall of Flame might be considered an afterlife for Blaseball players, as evidenced by Jaylen Hotdogfingers being required to literally leave the Hall in order to return to the league.

The Glossary defines the Hall of Flame as:

A resting place for Players that have been Incinerated. The Hall of Flame is located REDACTED and is guarded by a Being known as REDACTED

Blaseball fans can pay tribute to any incinerated player by viewing their player profile in the Hall of Flame and giving an offering of peanuts. As of the time of writing, there are no known consequences or effects related to tribute.

The Hall of Flame was first mentioned as the reward for a Patreon goal during Season 7. Upon reaching the goal on September 17, 2020, the goal's description updated to: [2]

IN THE TRENCH
THE MONITOR WAKES
A NAME IS MISSING

On Season 7, Day 100, The Monitor made its first appearance, revealing itself to participants of Blaseball at the end of a front page takeover by The Shelled One. The Monitor mentioned following Jaylen Hotdogfingers "from the hall, from the trench," confirming the connection between the Hall of Flame and The Hall Monitor.

During the Season 7 Election Results, The Monitor appeared again and offered to "make [the fans] a deal" to "see your friends" in exchange for "tiny eggs?" After this appearance, the Hall of Flame was available on the site for the first time, featuring the leaderboard of almost every incinerated player.

Briefly in the time immediately after the Hall of Flame became available, there was a blue line (similar to the red idolatry line) located under the 14th place ranking. It disappeared shortly afterwards. When asked to comment, Umpire Sunman denied its existence by saying: "LINE? DIDN'T SEE A LINE."[3] Its purpose is unknown.

Following the attack from THE SHELLED ONE'S PODS on Season 9's Day X, the mysterious blue line appeared in the Hall of Flame once more, again underneath the top 14 incinerated players. After the ascension of the Baltimore Crabs at the end of the season, the 14 players above the blue line were collected to form the Hall Stars, defeating the PODS in Season 10's Day X. After the Season 10 election, these 14 players were Released, and removed from the Hall entirely.