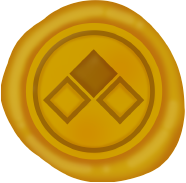 The icon for Decrees beginning in Season 12

Decrees are sweeping rule changes to the game of Blaseball voted on by participants and implemented by umpires, or other characters such as Lōotcrates. Blaseball participants may vote on any decree during the entirety of a season, with the election ballot explaining how many of the top decrees will be implemented (typically one or two). At the end of each season (after the postseason games), the winning decree or decrees are announced.

Decrees can affect everything from individual teams, such as the retiring the lowest scoring team in a season; fans, such as redistributing wealth from the top 1% of participants; or worldwide events, such as swallowing an entire city and renaming its home team.

Decrees are often, but not always, recorded in The Book of Blaseball for posterity. They can last for one season or indefinitely, depending on the decree's effects.

Decrees from each season are shown below, with the winning decrees highlighted.

These decrees from previous seasons have an ongoing effect.