(Redirected from The Vault)

The ILB Historical Preservation Site (commonly referred to as the Vault) is a location where  LegendaryThis Player is Legendary. Players and Items are sent to be Preserved by the Historian, and is also the home Ballpark of the Vault Legends. It was first referred to in the Based Evolution text in Season 12. Fans could Navigate to it during Season 24, where it was located at (1, 1). It is related to Blaseball 2, but the specifics of the connection are unknown.

The Vault is managed by Lōotcrates as part of their job as the Historian. Any player that is Preserved is put into the Vault with the  Legendary Modification, where they remain for a presumably infinite amount of time and can no longer be acted upon by Fans. Any attempts to remove a player from the Vault via non-sanctioned methods (such as preemptive Wills) instead produces a Replica. However, this does not mean it is completely impossible to escape -  Roamin'This Player has a chance to Roam at the end of each Season. and  Super Roamin'This Player will Roam at the end of each Week and each Season. players can Roam out of the Vault as demonstrated by Parker MacMillan, and the Vault Swap Blessing in Season 23 allowed a Player to be swapped with a random Preserved player.

As a Ballpark, the Vault notably has very low Fortification and very high Mysticism, promoting Weather and Modification activation within it. Additionally, it has the modifications  Climate Control,  Weather Reports, and  Cycling, all of which combined to create a different scenario every inning during the Semi-Centennial.

The Vault's first mention was in Season 12, in the flavor text for a team Evolving:

However, it remained confined to this single mention until the Season 15 Elections, where Lōotcrates mentioned it while introducing themself and Items:

"From the Vault
Gifts forged in Stars.
Tools of the New Age." 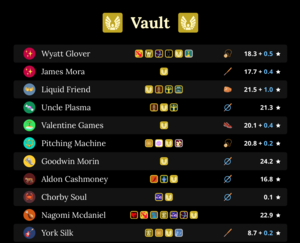 The Vault tab visible on Blaseball.com

Season 23 featured the ILB Semi-Centennial, in which the Vault acted as the Ballpark for the home team, the Vault Legends. Notably, despite it being created to encourage Weather events, only one occurred during the game - Vessalius Sundae draining Parker MacMillan during an inning with Blooddrain.

During Season 24, Fans could Navigate their Team to the Vault, notably placed where Blaseball 2 used to be on the Depth Chart and the icon for it featuring the Blaseball 2 door. The first team to reach the Vault was the Atlantis Georgias on Day 58, and were greeted by Lōotcrates saying the following:

Upon reaching the Vault, Teams were all given the  ForceThis Player is Forced into position. They cannot leave their current Location. Modification, preventing them from moving any more on the Map. Additionally, they were spared from Nullification. These Teams are listed in the following table, given alongside the date they gained the Modification.