A Team will enter Party Time if receiving 1 Win per remaining game would not land them in the Postseason. In Party Time, they'll receive random Stat Boosts from Partying.
See also: Glossary

Party Time is a condition, in which Blaseball teams who are mathematically eliminated from playoff contention must constantly party.

In Season β6, the decree called Enhanced Party Time was enacted. Under Enhanced Party Time, any player whose team is eliminated from playoff contention has a chance of "Partying", earning a permanent stat boost to a random stat during any active game for the remainder of the season. This decree was nullified by the Black Hole (Black Hole) in Season β24.

"WHEN A TEAM IS MATHEMATICALLY ELIMINATED THEY ARE IN PARTY TIME. THEY CANNOT STOP PARTYING"

Party Time was first introduced to Blaseball at the end of the Season β2 regular season, when Umpire Sunman commented on the games by describing Party Time[1] :

WHEN A TEAM IS MATHEMATICALLY ELIMINATED THEY ARE IN PARTY TIME.
THEY CANNOT STOP PARTYING

During the end of the Season β4 regular season, The Commissioner tweeted: [2]

As the race for the postseason tightens, some clarification for new fans:
In Internet League Blaseball, teams that are eliminated from playoff contention immediately enter #PARTYTIME.
They can never stop.

Since then it has become tradition for the Commissioner to announce when teams have reached #Partytime, with the teams gaining a 🎉 emoji on the standings page from Season β17 onward. Season 17 also marked the reveal of League-wide modifications, of which Party Time was one. 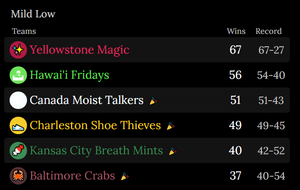 In the Season β6 Election, Enhanced Party Time was offered as one of three possible Decrees the community could vote on to go into effect, alongside the following:

Enhanced Party Time passed with 222,527 Votes, a decisive 77% of all Decree Votes, and the following message:

With the passing of the Decree, the Miami Dale were also granted the Life of the Party Modification.

From Season β7 onward, teams who were mathematically eliminated would gain the Party Time modification until the season's end[3].

The final Party that occurred as a result of a team being in Party Time occurred on Season β23, Day 99, when Breckenridge Jazz Hands batter Baby Doyle partied at the bottom of the 9th after being shamed by the Mexico City Wild Wings.

Due to the Nullification of Internet League Blaseball, no teams reached Party Time in the latter half of Season 24, meaning players were only able to Party thanks to other Modifications. In the Earlseason, parties were possible from Hotel Motels and Afterparty. The final Parties before Party Time was nullified took place on Day 25, with Alexander Horne of the San Francisco Lovers stealing home in the eighth and converting the run into a Party. Good Riddance allowed the Charleston Shoe Thieves to Party even after Party Time was nullified, first on Day 72 and later on Day 81.

Beginning in Season β5 when the LA Unlimited Tacos broke the record for the fastest team to be mathematically eliminated from the postseason, it became common to track the "speedrun record" for Party Time.

The Unlimited Tacos saw an especially terrible Season β5, ending the regular season with a record of 23 Wins to 76 Losses. This resulted in the Tacos achieving Party Time by Day 78 (Thursday, September 3), the fastest of any team by far to date. Many Tacos fans characterized this as a "speedrun," elevating the team's failure at Blaseball into a resounding success among the community. The Blaseball Beat later wrote of the event: "the fan-favorite Unlimited Tacos captured hearts and minds with a historic Regular Season Speed Run, reaching #PARTYTIME faster than any team ever before."[4]

After the unfortunate shelling of star batter York Silk, the Hawai'i Fridays set a new record in Season β9, entering Enhanced Party Time on Day 73 (Thursday, October 8) with a record of 17 Wins to 56 Losses at the time of entry. After ending the season with a 21-78 record, the Fridays were then chosen via Wild Card to be the fifth seed in the Season 9 Playoffs for the Mild League.

Starting off their ILB careers with a bang, the Tokyo Lift tied the Hawai'i Fridays' speedrun record in their first season, entering Enhanced Party Time on Day 73. The speed at which the team was able to enter Party Time is largely attributed to the Black Hole and Sun 2 weather effects. This has resulted in some requestsby whom? to distinguish between the glitchless[5] speedruns of previous seasons and the Lift's Any% speedrun.

The Tokyo Lift looked to clinch the speedrun again in Season 12, entering Enhanced Party Time on Day 83, the earliest out of all teams that competed during the season. They would go on to party a mere 5 times, mirroring the Magic's Season 8 run. However, the arrival of three new expansion teams (the Atlantis Georgias, Core Mechanics, and Ohio Worms) as well as the return of the Baltimore Crabs during the events of Latesiesta meant that all four teams were automatically eliminated from playoff contention and thus in party time[6]. As a result, the four teams have been acknowledged as the joint-holders of the Wrong Warp Party Time Speedrun.

In their first recorded season of Blaseball as part of the ILB, the Ohio Worms cleanly beat the previous record held by the Fridays and the Lift, entering Enhanced Party Time in just 67 days, with an impressive single digit win count of 8 and a record of 14-53. This makes the Worms the undisputed holders of the Party Time Speedrun record, even beating their timing set the previous season when they were introduced to the league.

The end of Season β8 saw a historic race for the bottom, as both the Yellowstone Magic and the Kansas City Breath Mints gave up their hopes of reaching the playoffs and instead competed to be the first to reach Enhanced Party Time. At the end of Day 83, thanks to a combination of Magic losing to Pies, Mints losing to Garages, and the Steaks winning their own game, both teams were mathematically eliminated within 30 seconds of each other. The Yellowstone Magic proceeded to party only 5 times in the remaining 15 games, and ended the season with a 29-70 record.

Season β10 saw the Hellmouth Sunbeams tie the defending champions the Hawai'i Fridays, with both teams entering Enhanced Party Time on Day 81. The Beams would go on to be selected as the Wild Card for the Wild League in the Season 10 playoffs.

Attempts to record the Party Time Entry for teams before Season 12 are ongoing. If you would like to help, reach out on the Discussion Pages
Note that if a team is selected by Wild Cards they enter Party Time twice, once in the regular season, and once in the postseason.

As of Season β20, Teams can be pulled out of Party Time when entering the Underbracket, and as such enter Party Time twice as well.

The following songs are about Party Time: