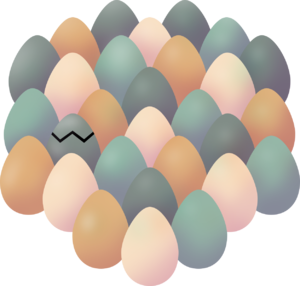 Eggs as depicted in the Bird Rights Decree.

Higher-tiered members of the Bloodhouse could submit new names to the pool by messaging The Commissioner via the Blaseball Patreon before it closed down on May 18, 2021 after The Game Band had secured investor funding.[1]

The Field of Eggs served as the birthplace for all Blaseball players since the establishment of Internet League Blaseball in Season 1.

After the creation and expansion of the Bloodhouse, a New Field of Eggs was opened and populated with the names suggested by its members. On Day 24 of Season 7, the first birth of the New Field of Eggs occurred, bringing Nandy Fantastic into the world. Nandy received the modification First Born to commemorate this.

Internet League Blaseball officials including The Commissioner and Umpires have confirmed the existence of the Farm System. However, no player nor any of their ostensible relatives have any memory of such a system. Blaseball metaphysicists suggest that after being hatched on another plane of existence players may be inserted into reality in times and places preordained to result in their eventual recruitment into the league.