The Fourth Strike (Season 3, 11)Those with the Fourth Strike will get an extra strike in each at bat.
Targeted Shame (Season 8)Teams with Targeted Shame will start with negative runs the game after being shamed.
See also: Glossary
The Fifth Base (Season 10)Ballpark: Teams playing in this Ballpark must run five bases instead of four.
Team: This Team must run five bases instead of four.
See also: Glossary
Walk in the Park (Season 11)Those with Walk in the Park will walk to first base on one less Ball.
Base InstinctsBatters with Base Instincts will have a chance of heading past first base when getting walked.
RoamlessPlayers cannot Roam to this Team.
ScatteredThis Player returned from Elsewhere a bit Scattered.
Under ReviewThis Team is Under Review...
Walk in the Park

Everyone. See Rivalries for more details

For a list of all former players, see Category:Former Hellmouth Sunbeams Players.

For a full season by season breakdown see the Sunbeams' Season Summaries, starting from Season 1.

The Sunbeams are known for their great team chemistry, and relaxed vibes that may surprise some given their historically poor record of being good at Blaseball. Overall, the Sunbeams haven taken a philosophical approach to their poor performances in seasons past, rationalising that compared to the latent daily horror of life in the Immaterial Plane, the Blaseball League, and on the teetering lip of a pit dropping straight into hell, "being bad at Blaseball isn't worth losing braincells over." Nobody blames anybody after a loss, and win or lose they all go get smoothies from the Shadow Moabbey. It is not recommended that anyone outside the team drinks the smoothies from the Moabbey. The players have worked very hard to be able to tolerate those god-awful smoothies, and fans are certainly unprepared.

The Sunbeams are also major figures in the wider Hellmouth community, with a strong sense of responsibility to be good role models who strongly discourage anyone from trying to come to Hellmouth. Even visitors planning only a short trip run the risk of experiencing the Tug, and/or gaining an Adaptation which would forever tie them to the accursed place the Sunbeams call home. However, should fate, blessings, weather, misfortune, elections, or grim determination bring a newcomer to the Sunbeams roster, the team will do all they can to help the new player feel welcome. The orientation programs are an ad-hoc affair, but combine practical advice for surviving in Hellmouth with haphazard explanations of Igneus "Iggy" Delacruz and Miguel James' theatrics and antics.

Many players on the Sunbeams roster are active members in the community: running local businesses, guest lecturing at Hellmouth Community College, or offering services to make Hellmouth that little bit less inhospitable for everyone living there.

For more information about the Sunbeams' concept of rivalries, and a list of known rivalries, see Moab Hellmouth Sunbeams/Rivalries. 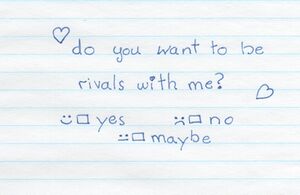 In the spirit of competition, everyone in the League is a rival of the Hellmouth Sunbeams, though some rivalries have been developed to the point they fall under a separate category of Major Rivalry, Rivalliance, or Anti-Rival. To learn more about these rivalries, or to find out your team's rivalry-status with the Sunbeams, please view the Rivalries subpage.

Lower Moab Scenic Overlook Field is located in the western part of downtown Hellmouth, just off of BAD 191. Its grounds rest on the edge of the main Hellmouth sinkhole, and are bisected by several smaller sinkholes, cracks, teeth, and ruined neighborhood blocks. The grounds are surrounded by the Infinite Mill Creek moat, whose inscrutable geometry protects the field from unwelcome visitors and aspiring Sun-killers.

When walking into the ballpark there is a waterfall feature, believed to be molten gold. The front entrance of the ballpark was angled in such a way that the Sun would rise in line with it and the waterfall on the first day of every new blaseball Season. As best as can be observed, the Sun changed its path slightly following the opening of the Hellmouth to preserve this tradition.

Sun 2, which appeared near the end of Season β10 and has been a constant presence in the skies above Hellmouth ever since, has not demonstrated this property. Talks were underway to build or seek out a system which would turn the ballpark and ensure Sun 2 could rise at season's dawn in alignment, but finalized plans have not yet been forthcoming.

Every time the Beams score a run, a child is allowed to hurl a pane of glass off the highest part of the stadium wall. This has led to numerous incidents of children trying to use psychic powers to manifest runs, which has been a great boost to the team's morale.

At the end of a winning home game, it is customary for the Sunbeams to dump the team's water cooler on the pitcher. The Hellmouth being what it is, this has resulted in 15 hospitalizations for steam burns this season.

In honor of Alexander Horne's revenge-driven grand slam tribute to Velasquez Meadows, fans of the Sunbeams refer to all grand slams as Horne Runs.

At the dawn of every Season, a fire is started somewhere in the Solarium using the sacred light from the easternmost Blaseball location. To date, the flame has been extinguished by Garages fans before the season has concluded. For more information, see the Solympic Flame page.

Beams fans are also known to yell players' Soulscreams to cheer them on.

These chants have either fallen out of fashion, or are associated with players no longer on the Sunbeams' roster.

Have fan art of the Sunbeams? Add it here or at Moab Hellmouth Sunbeams/Fan Works!