Joe Voorhees is a player for the Miami Dale, and has been with the team since Fall Ball. Voorhees has previously played for the Canada Moist Talkers, Charleston Shoe Thieves, Houston Spies, and Hellmouth Sunbeams.

Voorhees joined the ILB as a lineup player for the Canada Moist Talkers with the Return of Blaseball.

During the Season β3 elections the Moist Talkers benefited from the Rigour Mortis blessing the Houston Spies received, which increased Voorhees' baserunning from to .

On Season β4, Day 28, Voorhees was exchanged to the Charleston Shoe Thieves due to Feedback. Voorhees was replaced by Workman Gloom.

On Season β6, Day 76, Voorhees swallowed a peanut and had a allergic reaction, decreasing all of their stats by . Voorhees was traded to the Houston Spies in exchange for Howell Franklin during the Season β6 elections as a result of the Shoe Thieves receiving the Who? blessing.

On Season β7, Day 60, Voorhees was exchanged to the Hellmouth Sunbeams due to Feedback. Voorhees was replaced by Malik Romayne. During the Season β7 elections, Voorhees retreated to the Sunbeams' Shadows as a result of the Downsizing blessing.

During the Season β16 elections, Voorhees rejoined the Sunbeams' lineup in exchange for Dudley Mueller as a result of the Sunbeams' Foreshadow will.

in a game with Peanut weather by Tokyo Lift lineup player Jessica Telephone.

During the Season β17 elections, Voorhees retreated to the Sunbeams' Shadows in exchange for Nagomi Nava as a result of the Sunbeams' Foreshadow will, resulting in a combined 6.2 -> 6.9 stat increase.

During the November 4, 2022 Fall Ball, Voorhees fell to the Miami Dale.

It Came from the Throat...

Voorhees was variously described by his teammates as "solitary", "unnerving", "quiet", and "prone to leaving rusty stains in the water." During his tenure, he took up residence in a cabin within the Under-Arena, a location presently referred to as the Throat. Ultimately, all reports say Voorhees was both well-loved and well-feared by fans and players alike, a common status for players within the Chaotic Evil division.

In completely coincidental timing, Joe Voorhees joined the Canada Moist Talkers at the same time as multiple groups of self-styled "thrillseekers" vanished from the park during games. Some witnesses claim to have seen Voorhees following these individuals throughout the stadium. The individuals in question all disappeared while exploring a dark hallway, deep in the bowels of the stadium leading to a run-down shack rumored to be Voorhees's home at the time. Anyone who has attempted to enter the shack has never been seen again. When asked about this, a Moist Talkers representative responded:

The Moist Talkers don't know anything about any "disappearances" within our stadium. I would advise all fans stay within the well lit parts of our stadium and refrain from exploring the rest of it. On the subject of Joe Voorhees "stalking" folks throughout the park, all I can say is that he's in our dugout during the games. The only way he would be able to get out with nobody noticing is if he could teleport or something, which is absolutely preposterous.

When asked if he had any involvement in the supposed disappearances, Voorhees refused to answer.

Following his trade to the Charleston Shoe Thieves, Voorhees was initially met with a cool reception by both players and fans, likely due to either some resentment at his replacement of Charleston veteran Workman Gloom or disagreements over the appropriate number of homicides per game.

Following an altercation over the disappearance of several Shoe Thieves fans shortly after Voorhees's transfer, pitcher and manager Cornelius Games publicly banned him from the Charleston team clubhouse, reportedly stating: "Don't come back until you either learn to how to snag a pair of heels off a runway model or how to have some [expletive removed] respect."

In addition to duties as a hitter and position player, Voorhees took it upon himself to care for Beasley Gloom[1] in Workman's absence. While Voorhees initially found this role "challenging", according to teammates, he eventually formed a close bond with the pitcher, who shared his lifelong love of Slim Jim beef jerky snacks.

Struggling to bond with his new team, Voorhees reached out to his replacement on the Moist Talkers for advice. Gloom reportedly told him that "to be a Shoe Thief, you need to thieve some shoes," as well as advising him that many people, including most of the Charleston roster, disapprove of murder and may be uncomfortable around someone who commits it, a fact that Voorhees later stated he had "never been told before."

Gloom assisted Voorhees with stealing his first pair of shoes, a pair of 1989 Air Jordan IV's located in an airtight vault in an abandoned private collection in Sunken Charleston. Impressed with this heist, and swayed by the testimonials of both Beasley and Workman Gloom, Games relented and lifted Voorhees's ban from the clubhouse, on the condition that he refrain from murder in the future. Voorhees accepted the condition and the number of corpses discovered in Choux Stadium each week decreased dramatically.

Shortly after his first month playing with Charleston, the team held a party for Voorhees, presenting him with a pair of steel-toed boots stolen from a rare earth metals processing plant, and a "30 Days Murder Free!" badge designed and constructed by Velasquez Alstott.

Voorhees' tenure with the Houston Spies lasted a mere sixty days, but according to declassified exit interviews he expressed confusion at the team's culture. Even after insisting on multiple occasions that he had no involvement in murders of any description, Voorhees claimed his teammates would "just wink and nod knowingly. Very weird vibes."

On transferring to the Sunbeams, Voorhees expressed considerable excitement at the prospect, describing Hellmouth as "basically the most cursed, awful, place in all of Blaseball. It's a slasher film aficionado's dream, you know?"

Dragged Off to Hell 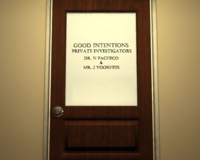 Despite concerns from individuals in the wider Hellmouth community about Voorhees' supposed pastimes, among the Beams themselves, the matter appeared mostly settled following two key encounters. The first was between Voorhees and Lars Taylor, where the two reportedly engaged in seventy seconds of animated discussion in both ASL and LSQ before Taylor told everyone "he's cool." Nagomi Nava expressed a similar sentiment following an eight-minute staredown with Voorhees in a corridor.

Voorhees continued to be connected or otherwise implicated with "disappearances" around Hellmouth. Fellow Sunbeams batter and part-time noir detective Nerd Pacheco, after consulting with Taylor and Nava, extended an offer to Voorhees to jointly open a detective agency.[2]

During his 39-day career with the Sunbeams, Voorhees hit a respectable total of 10 home runs, including a Grand Slam on Day 91.

Voorhees was a common sight around the Hellmouth community prior to his disappearance. He made time outside of his busy blaseball schedule to volunteer with community events, such as: knife sharpening workshops, cleaning and flossing the Hellmouth's teeth, and distributing topiary shears to Hellmouth households. He also enjoyed exploring Utah's varied national parks, against the recommendations of the Sunbeams' coaching team.

The circumstances surrounding Joe Voorhees' disappearance into the Shadows are still hotly debated to this day. The IRM randomly chooses one rumor of many written by the Blaseball community when the page is loaded. This time, the Interdimensional Rumor Mill reveals a Rumor from IF-38.005 out of its Rumor Registry...

During his short stint in Hellmouth, Voorhees established himself as the Beams' Bad Boy. He would often disappear immediately after games, with teammates and staff finding him unreachable for up to days at a time. Rumors spread throughout Hellmouth of Voorhees' proclivity for nocturnal activities, and sightings of him along Old Highway 191 in the middle of the night became more frequent as Season β7 drew to a close.

During the last inning of the season's final game, Voorhees slipped off the field unnoticed. As the inning ended, members of the Sunbeams team, grounds crew, and management office found that as he left, he had slipped thank you notes into their pockets, shoes, hats, and safes, each thanking them for showing him kindness during his time in Hellmouth, each hand-written on expensive stationery and featuring playful hand-drawn cartoons of smiling knives. Nearly all reported feeling a chill go down their spine at some point during the ninth inning.

Voorhees was last seen alive at an abandoned Mudlack Steakspout on the outskirts of the Hellmouth, near the wild regions where the Shadows stretch impossibly long. Yet still, Hellmouth residents still report seeing a masked figure out on Old Highway 191 at night...[3]