Miguel James is a player in the Shadows for the Hellmouth Sunbeams, and has been with the team since Season β1.

James joined the ILB as a pitcher for the Moab Sunbeams with the Return of Blaseball.

During the Season β6 elections the Sunbeams received the Move the Mounds Closer blessing and benefited from the Sharing Signs blessing the Boston Flowers received, which increased James' pitching from to .

On Season β7, Day 74, James' baserunning ability was siphoned by Baltimore Crabs lineup player Tillman Henderson in a game with Blooddrain weather, dropping it from ★★★½ to ★★½. During the Season β7 elections the Sunbeams received the Stickum blessing, which randomized James' defense from ★★★ to ★½ .

During the Season β9 elections the Sunbeams received the Mutually Arising blessing, which increased James' baserunning and defense by .

During the Season β10 elections the Sunbeams benefited from the Sharing Signs blessing the Unlimited Tacos received, which decreased James' pitching, bringing it to .

During the Coffee Cup, James played for Royal PoS as a pitcher.

During the Season β13 elections the Sunbeams benefited from all four "Bubble" blessings, which increased James' pitching and defense by 4%.

During the Season β15 elections James gained The Fourth Strike modification as a result of the Mulligan blessing.

During the Season β22 elections, James gained the Negative modification as a result of the Rotation Flip blessing.

Over the course of Season β23, James entered and exited the Sunbeams' Shadows two times as a result of Lower Moab Scenic Overlook Field Fax Machine events, ending the Season on the pitching rotation.

On Season β24, Day 32, James retreated to the Sunbeams' Shadows in exchange for Zack Sanders at Lower Moab Scenic Overlook Field via the Ratified Fax Machine.

The so-called "Flames of James" are one of, if not the Sunbeams' greatest assets. While this is mostly metaphorical, a reference to the kind of luck that James brings to the field, she is also entirely wreathed in flames at all times.

Miguel James was a great pitcher back in the Moab days, but when the Hellmouth swallowed up everything, he momentarily lost hope—until she Stared Into the Sun. This did not blind James, but instead set him entirely aflame. With newfound confidence, swagger, and fire, Miguel James returned to the field—his confidence and charm unmatched, as is her passion.

James hard at work on a sewing project.
by Coblin

Miguel James finds success thanks to his "forbidden second", in which everyone collectively blacks out during her pitch windup. Team officials have described James's pitching motion as "like cracking an egg with chopsticks".

James has one of the finest collections of (regrettably flammable) hats in the Immaterial Plane.[1] A self-taught textile engineer, he learned the skill as part of her quest to find a fireproof hat. However, he still regularly hand-sews the Sunbeams logo onto her hat, as he has has not yet found a sufficiently fireproof applique and the logos keep burning off. During the offseason, she teaches fashion design courses at Hellmouth Community College.

Despite the Sunbeams being known for not having a large public presence, James has a respectable amount of clout in the fashion design world. He is known for frequently bringing up her status as a "pitching professional" in the midst of interviews about his career as a designer and for stating the game to have "majorly influenced" a majority of the revolutionary[citation needed] design elements she has brought to the headwear scene. When an interviewer with Vlogue Magazine asked James about the experience of being flipped Negative in the Season β22 elections, he enthusiastically responded with the following:

Her instaglam, as of the time of writing this article, has 0 followers.

Miguel James has a cool hat that he won't shut up about, no matter how often she is told how cool it is. This intense enthusiasm is a near-guaranteed topic in any lengthy discussion with James, who explains that "finding fashionable, ethically-sourced headgear that can withstand over 5000 degrees Kelvin is a tough ask!"[3]

James is effusive in interviews about his hat, which supposedly took several years of globetrotting to find something which could withstand her flames while still being stylish. James encourages anyone "with plans to be on fire in the future"[4] to shop at the Hat Emporium, one of the retail outlets of the Siblings of Exposure.[5] 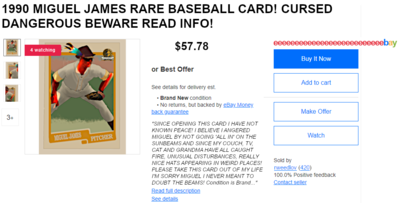 Official Miguel James merchandise has been linked to collectors befalling fire-based misfortunes of various stripes. This has included spontaneous combustion, hallucinations of fire and smoke, and the Tug. The "curse" has not been observed in counterfeit merchandise, as all of it spontaneously combusts upon completion of manufacture.[6]

This phenomenon has been observed in replica uniforms, "Flames of James Lighter Fluid And Commemorative 'Beverage' Flask"s, and Tlopps cards.