Brisket Friendo is a player in the Shadows for the Seattle Garages, and has been with the team since the Season 17 elections. Friendo has played for the Hellmouth Sunbeams.

Friendo joined the ILB as a lineup player in the Shadows for the Kansas City Breath Mints as the Breath Mints' Season 13 Playoff Birth.

On Season 13, Gods' Day, Friendo and Tad Seeth of the Charleston Shoe Thieves disappeared from the Blaseball website, and gained the Redacted modification. Liquid Friend and Uncle Plasma were hired by The Commissioner to take part in the Investigation into the disappearances of Seeth and Friendo.

On Season 16, Day 1, Friendo exited the Secret Base at the Chesapeake Racetrack and Ballpark, replacing Redacted with the Attractor modification. After being run home, Friendo was added to the Baltimore Crabs' bench, with stats appearing to be approximately doubled since redaction. This made Friendo the first player to rejoin a team after being redacted.

During the Season 16 elections, Friendo joined the Hellmouth Sunbeams' active roster in exchange for Alston Cerveza as a result of the Crabs' Foreshadow will.

Friendo was traded to the Seattle Garages in exchange for Howell Franklin during the Season 17 elections via the Sunbeams' Equivalent Exchange will.

During the Season 18 elections, Friendo became an Alternate, gained the Negative modification, and lost the Attractor modification via the Garages' Alternate Trust will.

During the Season 19 elections, Friendo retreated to the Garages' Shadows in exchange for Emblem Warhorse as a result of the Garages' Foreshadow will, resulting in a combined 7.6 -> 8.4 stat increase.

Dust billows as the file box lands on the table. While many archives in the Interdimensional Rumor Mill are unified in some way, this... definitely isn’t one of them. The accompanying Rumor Registry explains all of the contents... wherever it is... but for now you grab the folder labelled IF-28.498 and start reading...

The Nature of Brisket

The duo known as Brisket Friendo is comprised of the entities known as Brie and Brie’s Cat, Brisket. Brie is a formerly normal formerly human former denizen of the Hellmouth and Brisket is a shapeshifting alien from the depths of space that has taken the form of a cat in a shark costume, specifically a blåhaj.

The pair play the game of blaseball together, with Brie batting and Brisket running the bases and defending. When filling out the ILB recruitment forms, Brie had originally entered Brisket's name as a joke, but Brie’s own stats on the form as well. As a result, both of them were drafted to play together, as according to the unknown laws of Blaseball.

Brie is Brisket’s owner. Hailing from the Hellmouth, Brie formerly worked at an Outback Steakhouse before moving to Seattle and becoming subject to Stlarbucksification, joining the baristas in the area.

Brie is a grad student who continues to work towards a Masters in Graphic Design through online courses from Hellmouth Community College. Graphic Design is Brie's passion, however Brie is also minoring in Advertising “in order to learn the ways of subtle manipulation and how to thwart it”[1]. Brie often signs propaganda and other designs with the signature phrase “Brie Delivery”.

The first meeting between Brie and Brisket took place in the Hellmouth, where Brie found Brisket wandering around and promptly offered love and affection to the very good cat. A bond was formed and Brie adopted this new friend. Brie hadn't thought of a name at the time and all of Brie's friends simply referred to them as "Brie's Cat" which quickly morphed into the name Brisket.

It is unclear whether or not Brie is aware that Brisket is not, in fact, a typical cat. When asked about the shapeshifting, extraterrestrial nature of the creature, Brie has answered both affirmatively and in a way that does not indicate that Brie is fully aware of what is being asked, but with a tone of understanding nonetheless. These are not helpful answers.[Opinion]

Brie is also a hobbyist ventriloquist and appreciates puppets, such as the iconic Frasier Shmurmgle. When not playing, Brie will often pick up Brisket and speak as if through the cat. Brie is excellent at throwing Brie’s voice, which has startled a number of fellow teammates when Brisket suddenly stumbles in and starts talking to them.

Fellow Garages player Arturo Huerta has become a favorite audience of Brie’s. While Brie likely still cannot perceive Huerta’s features reliably, Brie can identify him quickly and will corner him with Brisket, subjecting him to whatever routine Brie has come up with. 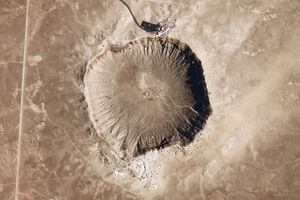 Brisket's impact crater in the desert.

The creature known as Brisket first appeared on Earth some time since the Return of Blaseball, crashing into the ground in the deserts of the American Southwest. While the initial form of Brisket is not currently known, it is documented that shortly after emerging from the smouldering crater they bumbled into a nearby town to hunt for food and, in an effort to lull their prey into a false sense of security, took the form he is now famous for: a small cat in a blåhaj costume. He has stayed in this form ever since after realizing that people will feed him whenever he meows cutely and as a result of all of the headpats and ear scritches he has received.

Brisket’s extreme density has required a re-examining of conventional metrics, and currently a new measurement of Absolution has been proposed to reflect this; Brisket is quantifiable as 1 Absolute Unit. Their density is so great that their gravitational pull will tug light objects off of shelves, which is very useful for a cat as he does not need to jump up to them to knock them off manually. The absoluteness of his density can fluctuate on command, allowing them to become too heavy to pick up when they choose (Brie is the one exception; Brie can always pick him up, even if he acts grumpy about it). Brisket loves Brie very much and is a very good cat.

It has been suggested that the Blahaj costume can communicate with Brisket telepathically, however they are in such sync that any difference is insignificant.

When asked for more details about the exact nature of their relation with the shark costume, Brisket replied “a heem heem whimper”.

The pair love to play instruments together. Brisket especially enjoys the floor piano, the bongos, and purring, while both also dance, play the keytar, drums, and tambourine.