Hendricks Richardson is a lineup player for the Seattle Garages, and has been with the team since Fall Ball. Richardson has previously played for the Breckenridge Jazz Hands, Hellmouth Sunbeams, and LA Unlimited Tacos.

Richardson joined the ILB as a lineup player for the Breckenridge Jazz Hands on Season β2, Day 80 after the incineration of Alexandria Dracaena.

On Season β3, Day 11, Richardson swallowed a peanut and had a allergic reaction, decreasing their batting ability from to . During the Season β3 elections the Jazz Hands received the Evil Wind Sprints blessing, which increased Richardson's baserunning from to .

On Season β6, Day 44, Richardson was exchanged to the Hellmouth Sunbeams due to Feedback. Richardson was replaced by Randall Marijuana. During the Season β6 elections the Sunbeams received the Move the Mounds Closer blessing and benefited from the Sharing Signs blessing the Boston Flowers received, which increased Richardson's pitching from to .

During the Season β7 elections, the Sunbeams received the Stickum blessing, which boosted Richardson's Defense from to .[1]

On Season β8, Day 70, Richardson's pitching ability was siphoned by Baltimore Crabs pitcher Brock Forbes in a game with Blooddrain weather, dropping it from to a star.

On Season β9, Day 24, Richardson siphoned some of Chicago Firefighters batter Justice Spoon's baserunning ability in a game with Blooddrain weather, increasing their own ability to . During the Season β9 elections the Sunbeams received the Mutually Arising blessing, which increased Richardson's defense from to .

During the Season β10 elections the Sunbeams benefited from the Sharing Signs blessing the Unlimited Tacos received, which increased Richardson's batting to , after losing stars to siphoning throughout the season.

During the Coffee Cup, Richardson played for Club de Calf as a lineup player.

On Season β13, Day 56, Richardson's baserunning ability was siphoned by LA Unlimited Tacos batter Halexandrey Walton in a game with Blooddrain weather, decreasing it 3.6 -> 3.2 . During the Season β13 elections the Sunbeams benefited from all four "Bubble" blessings, which increased Richardson's batting, baserunning, and defense by 4%.

During the Season β15 elections, Richardson's baserunning was boosted 3.4 -> 3.5 as a result of the Running Practice blessing.

During the Season β17 elections, Richardson's moxie increased 2.9 -> 3.6 and thwackability increased 3.6 -> 4.1 as a result of the Buddies and Last Not Least blessings.

On Season β23, Day 20, Richardson retreated to the Tacos' Shadows in exchange for Vito Kravitz at Al Pastor Memorial Park via the Ratified Voicemail.

Richardson ended the Expansion Era with 3.6 in Batting, 1.1 in Pitching, 3.7 in Baserunning, and 2.4 in Defense. Richardson had a Golden Bat and the Scattered and Walk in the Park modifications.

During the December 23, 2022 Fall Ball, Richardson fell to the Seattle Garages. On Season 1, Day 1 of the Return(s), Richardson became a lineup player for the Garages.

Growing up, Hendricks Richardson was not close to or supported by his rich parents. He transitioned post-high school and soon after he stole his family’s sledding dogs and ran away to Breckenridge. Once he had saved up enough money to attend college, he discovered Marxism and fell in love with the study, and soon entered the world of academia. He soon gained his PHD in Marxist Studies and later became a professor at the same university.

Richardson was a destitute professor who spent decades studying economic systems and writing papers assailing capitalist structures. His graduate dissertation, Historic Examples of Functioning Communism and the Capitalist Structures that Broke Them, included interviews with Alexandria Dracaena, whose lived experience with an African commune proved invaluable to his work. During the writing phase, he once again met Dracaena, and the two eventually became close friends.

On his 70th birthday Richardson was attacked by a Trustchild, a rabid and privileged creature that hunts the poor by the light of the Gold Moon. This scarred Richardson's credit identity with the Curse of the Funded Trust, permanently giving him access to billions of dollars, and turned his withered body into the monstrous hybrid he was known as during his career on the Jazz Hands: an old man with a bushy beard and a baby's face.

After being traded to the Sunbeams, the Hellmouth cursed him for his wealth, transforming him into a giant, non-humanoid dragon. Despite now being a literal, fire-breathing dragon with molten gold for blood, Richardson's blaseball performance only improved a small amount.

In Season 16, Richardson received the first and only non-standard-issue item he would receive: a Golden Bat, granting Super Idol. This cursed bat made him a tool of the economy, sometimes even being the most valuable “solo seeds” idol, much to his chagrin. Despite Richardson’s best efforts, it refuses to break.

Pannonica Oko has expressed much interest in Richardson’s curses, not entirely kindly.

Transition to life in Hellmouth

Richardson and Sigmund Castillo became fast friends, due in part to both being new residents of the Hellmouth. When asked about the blooming friendship, Richardson began a lecture about Castillo being a wonderful example of a community governing itself, calling Castillo his "lair buddy".

Outside their blaseball career, Richardson still maintains a keen interest in participating in academia and educational outreach focused on capitalist critique. Their new draconic form has posed some logistical issues,[2] which they have mostly overcome with assistance from teammates (detailed below).

Hellmouth Community College has been asking Richardson to become their new economics professor since his move, but Richardson has instead been wandering the desert in order to teach the native flora and fauna about communism. His sessions have become very popular with the local cacti. Fellow lineup players Lars Taylor and Nagomi Nava will occasionally be seen at Richardson's lectures, transcribing them for Richardson to later submit to academic journals.[3] The transcriptions are then, reportedly, sent to Sandoval Crossing for proofreading, who then submits[4] the completed papers at the Community College on their way from their apartment to the Stadium. Richardson also streams the lectures on Twlitch, with the stream modded by his TA, Throckmorton Smooth. Richardson is work friends twice over with fellow academic Nerd Pacheco.

Richardson's new reptilian anatomy has made him a fan of basking, a hobby enjoyed by many ectothermic entities around Hellmouth. His teammate Zack Sanders runs a blog reviewing ideal sunbathing spots around Eastern Utah, which the two love to discuss in the locker rooms before games.

In the Season 22 elections, Richardson volunteered for a work exchange with Son Jensen, in order to study Los Angeli’s anticapitalism and compare the post-scarcity economies of LA and the Hellmouth, locations of vastly different population sizes. He had heard about Los Angeli from Nicholas Vincent, who took some classes with him during xer visits to Hellmouth. Richardson was abundantly warned of the dangers of Looking Too Close, and so warned off of studying space-time continuum fluctuations while there in too much detail. Teammate Basilio Fig initially did not realize there had been a trade, as the Tacos had traded a dragon for a dragon. For the first few weeks, Richardson continued to stay in Castillo, thereby giving Castillo their long-awaited Infinite Wing, from which Felix Garbage can cautiously research the Hellmouth and the scuttles can escape into the wild.

Since this was not his first time somewhere new and was a less hectic situation, Richardson bonded with the Tacos faster than he initially had with the Sunbeams. He became especially close friends with Felix Garbage, a gravitational physicist who helped him settle in, and who had experience living in close quarters with dragons due to having been in the same apartment as Glabe Moon. He also bonded with Peanut Bong, partially due to their philosophical academic leanings and estrangement from their family. Although Richardson does not blame Bong for shelling Pacheco, there is still some undiscussed emotions in their friendship, including Bong being somewhat jealous that Richardson appeared to have an easier time with his supply of curses than Bong. Despite this tension, they are still friends.

LA Taqueria grew an in-stadium lecture hall to welcome Richardson, where he can be seen educating the various creatures around the stadium, including Lucas Petty’s Kit Crew, the scuttles, various rats, and on one notable occasion, Lil Mijo. The rats and one of the scuttles also act as TAs, and are skilled in this due to their long experience with anticapitalism, while Richardson’s former TA at HCC, Throckmorton Smooth, has received his position at HCC and also continues to be his Twlitch mod. Smooth also appears to be cousins “for real” with Tacos pitcher Yummy Elliott. In his free time, Richardson appears to have entered his gamer era, streaming various games on Twlitch. These include solitaire (often very long streams of it, where he explains communist theory), Smooth’s Master’s project (a Marxist dating sim), and demonstrating how broken economy games can be.

Within just a few games in active play, Richardson was voicemailed into the shadows in exchange for Vito Kravitz. Kravitz, being easily the least anticapitalist member of the Tacos, was eager to rub that in despite performing markedly worse for his star rating than Richardson. Richardson has what could be described as a sports anime-esque rivalry with Kravitz despite not caring that much about the splort itself, but is large enough to cover Kravitz entirely with one paw when he gets too annoying. Richardson and Kravitz had opposite reactions to the Coin’s death resulting in all coins melting, and Richardson has been trying to help Kravitz cope with post-capitalism since.

It is unclear whether the demise of the economy has broken Richardson’s curse. Coins do not exist, but the Golden Bat still does. Richardson continues to teach History of Economics and Communist Theory in Los Angeli.

This is a fork of the IRM, and chooses one entry of many written by the Blaseball community when the page is loaded. Hendricks Richardson has a folder full of memes sent to him by his students at Hellmouth Community College. If you would like to see the full contents of Hendricks Richardson's Non-Biney Binder, add additional entries; click Rumor Registry. If you would like to edit this entry, click Page-3.
This system is based on the Interdimensional Rumor Mill, which can be read about at Interdimensional Rumor Mill.

Additional Info: Sent to the tablet of Hendricks Richardson at 12:37pm Tuesday, ████ ████████, 20██. Hendricks took the screencap entirely by accident, and then spent a subsequent four hours figuring out how to print the picture. 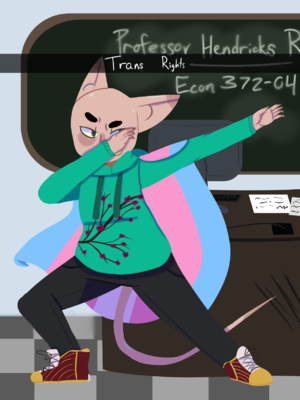