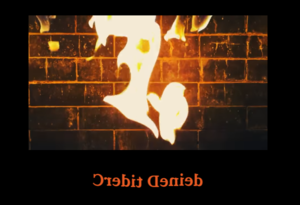 The first recorded appearance of Namerifeht.

Namerifeht is the seventh entity to arrive in Blaseball, and is known in for the forging of Sun 1. Namerifeht was first mentioned when The First Day, 1st Edition was revealed in the Library, and they first appeared in-game before the Season 23 Election.

Namerifeht's in-game appearance is a video of an upside-down yule log fireplace with a brick wall behind it[1]. Namerifeht's text is displayed with each letter reversed in an orange color, usually with the first letter in all of their words being capitalized.

Namerifeht appeared briefly to speak after the nullification of Blaseball via Black Hole(Black Hole):