No description on-site. Released players no longer have their star ratings visible on their page; their Soulscream is instead called a Soulsong and is colored blue.

Released is a Player Modification, first seen during the Season β10 election.

Players with the Released modification have their player page on the Blaseball website heavily pared-down as opposed to a standard player, with their Star Ratings and Team affiliation being removed, their Soulscream is replaced with a blue-colored Soulsong, and the player is unable to be Idolized by Fans. 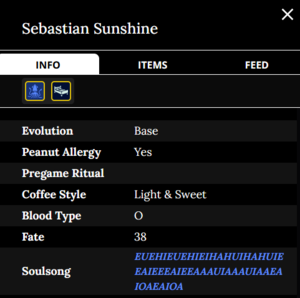 During the events of Season 10, Day X, The Microphone began to speak on Twitter as the Shelled One arrived to taunt the Baltimore Crabs on the heels of winning their third championship.

Following this, The Hall Stars formed and arrived to challenge THE SHELLED ONE'S PODS, eventually defeating them.

During the Season β10 election, a Tiding was declared that said that "The Deal is complete.", granting all players that ended Day X on The Hall Stars the Released modification.