Wyatt Owens is a player in the Shadows for the Miami Dale, and has been with the team since Season 6, Day 18. Owens has also played for the Unlimited Tacos.

Owens joined the ILB as a pitcher for the Los Angeles Tacos on Season 3, Day 16 after the incineration of Natha Kath, with the name Emmett Owens.

After the Season 3 elections, Owens was briefly known as Wyatt Mason due to The Wyatt Masoning. During The Unmasoning, Owens's name was partially restored to Wyatt Owens.

On Season 6, Day 18, Owens was exchanged to the Miami Dale due to Feedback. Owens was replaced by Francisca Sasquatch.

During the Season 13 Election, Owens retreated to the Shadows in exchange for as a result of the will.


The remainder of this article contains lore created collaboratively by the Blaseball community.

Recruitment to the Tacos

On the day Kath was incinerated, Owens was driving his old pickup down a country highway at dusk. A light appeared overhead just before he was sucked up and abducted by a giant flying comal. The next thing he knew, he wearing a Tacos uniform, standing on a pile of ash.

Prior to joining the Tacos, Owens was a fifth-grade art teacher in Barstow, California.

He was born in Visalia, California on a family farm, and embraced the hard work of the agricultural life from an early age. However, he was also a creative type, spending his free time drawing, painting, coloring and sculpting. While others were out playing kickball, he preferred to stay in and work on his latest drawing.

He graduated from Fresno State University with a degree in Education, minoring in Spanish. His goal was to teach children in more rural parts of California how to unlock their inner creatives and foster a growing art scene in an agriculture-heavy part of the state. However, he only found a job teaching art in Barstow, a more sparse and arid locale, where agriculture was not as important. Still, he was able to connect with many of his students, relating to their desire to expand their creative horizons beyond the transportation and military industries that dominated the area.

Yet with no farms to work on, Owens noticed many students were rather dormant and inactive, so he volunteered to be the school's Physical Education coach and helped the students learn how to play kickball. Despite not playing much in his youth, Owens took to the sport like a natural, as his fitness levels were strong from a childhood on the farm. He played "all-time pitcher" to allow the students plenty of opportunities to kick and run the bases, but he made impressive catches and developed more challenging rolls to test more athletic and capable students in his classes. 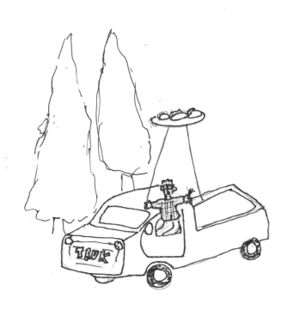 This is what drew the eye of the blaseball gods, which believed Owens possessed a natural ability to pitch a blaseball and join a team full of kickball players with whom he would share common ground. His transportation to Al Pastor Memorial Park was sudden and unexpected, and his pickup truck veered off into the desert and crashed into a cactus once his body was taken to a different plane, but Owens quickly found himself at home with his Tacos teammates.

Owens succeeded Farrell Seagull and became the Miami Dale's current Artist in Residence. He regularly leads beach cleanups followed by art classes where he helps the children turn their favorite finds into art pieces. It is said that upon being gifted a necklace made by a student, Owens promised to wear it at his next game causing a surge of creativity among the other students. Owens can be seen wearing an assortment of reclaimed art and ocean debris jewelry while he is pitching, often changing accessories between innings in order to fit all the gifts into a single game.

Owens has also brought his agricultural background to the team, beginning the Miami Dale Mango Grove along with fellow season 6 Miami implant Beck Whitney. The two formed a friendship as players new to the city and together grow the fruit used in much of the treats sold in concession stands at Worldwide Field.