ReleasedNo description on-site. Released players no longer have their star ratings visible on their page; their Soulscream is instead called a Soulsong and is colored blue.
SquiddishWhen a Squiddish player is incinerated, they'll be replaced by a random Hall of Flame player.

Landry Violence was a lineup player for the Hades Tigers, and was with the team from Season 1 until being incinerated on Season 3, Day 110.

Violence was a fan-favorite both among Tigers fans and league-wide until his incineration during Game 2 of the Season 3 Internet Series (Day 110) against the New York Millennials. The Tigers went on to win that game and take the series 3-2. This moment led to the term "Rest in Violence" (often abbreviated RIV) being used to commemorate incinerated players, even being used as the official subtitle for Season 8.

When the Hall of Flame opened, Violence was quickly pushed to the top by fans offering tribute. During the Rise in Violence campaign in Season 10, fans idolized Violence to grant the Fire Eater modification in preparation for Day X.

On Day X, Violence was the second player in the Hall Stars lineup. Violence was once again targeted by an Umpire. Due to the Fire Eater modification, Violence survived and hit an automatic home run during the final inning of the battle against THE SHELLED ONE'S PODS.

After Day X, Violence was Released from the ILB.

Little was known about Violence before he ascended to his current form, an incantation read shortly before the game by a lucky fan. For the next few hours, the fan would be infused with the spirit of Violence and play like a demon; afterwards, their life would be forever changed as the Violence lived on in them.[1] Regardless of the body Violence used as a vessel, he used he/him pronouns and played shortstop. No matter his host, Violence was always the hottest member of the team. He did not drastically alter the physical form of his hosts; he simply made them realize how hot they were all along.

There is a laundromat in Tartarus named Landry's Laundry. Violence was unaffiliated with it, but did not seem to mind the use of his name. 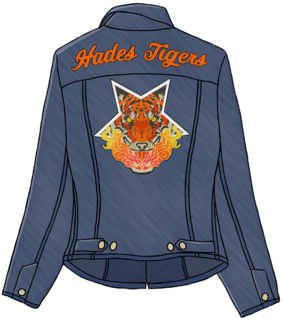 The Jacket itself by @DyoGenesis

The only signifier of Violence was a denim jacket with a Tiger on the back (pictured on the left), mysteriously acquired recently by Violence's soon-to-be host. The method by which the host acquired the jacket varied between manifestations. It had been documented dropping from the sky, appearing in their wardrobe, or arriving at their home in a package the day before a game. Regardless of how they obtained the jacket, when they read the incantation a bolt of red lightning struck the lucky fan. The Tiger's eyes would glow an eerie red, and once again Violence would take to the field of Blaseball.

Attempting to summon Violence via the incantation without the jacket was not recommended.

On Day 110 Violence was possessing Hades fan Paula Turnip for Game 2 of Season 3 of the Internet Series. During the match against the New York Millennials, Violence was confronted by a Rogue Umpire. Seeking to protect his host, Violence used his spirit to shield Turnip from the Umpire's fury, resulting in his incineration. Violence's lightning was scattered across the sky above the Sixth Circle Stadium, where it remains to this day.

Upon Violence's incineration, the relatively unscathed Paula Turnip picked up Violence's bat, screamed "Violence begets violence!" and tried to steal third base. This proved her mettle as a true Tiger and she was immediately brought onto the team to take Violence's place.

The remains of Violence's jacket are currently on display at the Landry Violence Memorial Hall in Sixth Circle Stadium. Violence lives on in the hearts of every Tigers fan, and also the howling crimson thunderstorm that now hangs over the outfield. Players say that the stadium's air now tastes faintly of interpersonal conflict.

Shortly after the end of the season 3 championships, Fearful Symmetry arranged a series of interviews centered on the impact Violence's incineration had on the team.[3]

"It has happened. Blow the horns and beat the drums. A soul has been freed from the depths. Hades sees their own Landry Violence to the great league beyond! We celebrate your escape, Landry! No longer are you bound to this mortal realm by the laws of magic and the will of gods! We welcome the blaze of glory, we celebrate the breaking of chains, and the freedom afforded the incinerated. We may miss you but we would never begrudge you this moment. We would be so lucky to be beyond the coil, oh Spirit of Violence. May you wander ever free! The pyres lit, a chorus of former hosts of Landry Violence have gathered and are stoking the flames. They hum a dark and menacing dirge. They mourn for the small and essential part of themselves they have lost. Their tears flow together into a river, carving through the stone. All of the denizens of Hades gather on the banks of the newly formed river. They bring effigy and offering and set them alit upon the flowing torrent. There is an ominous and wretched silence save for slow weeping of those who bear this loss the hardest." - "Sympathy For Mr. Violence" The Hades Tigers Official Fan Club (@HadesBlaseball)

Thanks to tributes from fans around and under the world, Violence was chosen as one of the Hall Stars on Season 10, Day X. Violence was apparently able to join the game without the need for a summoning incantation or a host, with fans present describing his physical form as "living lightning."

During the game, a rogue umpire attempted to incinerate Violence. (Several fans present for the moment claim it to be the same umpire that originally incinerated him, but this is unconfirmed.) However, rather than burning, Violence was able to absorb the energy of the incineration. He then released it to fuel a devastating home run.

With the defeat of the Shelled One, Violence was Released from the Internet League. Violence has not been seen in public since Day X, though Tigers fans and players claim he's "around here somewhere" when asked. Fans have begun offering tributes to Violence in the now somewhat ironically named Landry Violence Memorial Hall, in the belief that doing so will help protect their favorite players.

In news that Fearful Symmetry requests we remind you is, legally speaking, completely unrelated to the above paragraph, the ILB has noted a marked increase in the average number of Umpires struck by lightning during Tigers games. 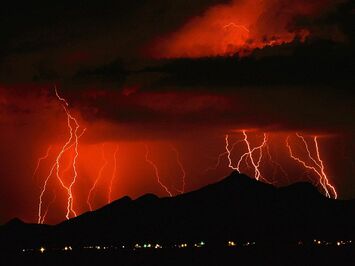 On Again, Off Again Host