ReleasedNo description on-site. Released players no longer have their star ratings visible on their page; their Soulscream is instead called a Soulsong and is colored blue.

Scrap Murphy was a pitcher for the New York Millennials, and was with the team from Season β1 until being incinerated on Season β2, Day 40.

Murphy joined the ILB as a pitcher for the New York Millennials with the Return of Blaseball.

On Season β2, Day 40, Murphy was incinerated and replaced by Felix Garbage.

During the events of Season β10, Day X, Murphy was raised to join The Hall Stars after the incineration of Sebastian Telephone. Following The Hall Stars' victory over THE SHELLED ONE'S PODS, Murphy was Released from Internet League Blaseball.

Before joining the Millennials, Scrap Murphy was a former New York Blittle League Coach for the Manhattan Rent.

Murphy previously resided in the Haunted Mansion at Dilsney World; however, as of late he has been seen in a spectral form hanging behind and around Conrad Vaughan. He remains in the hearts of all Millennials. When he is not shadowing Conrad, he can still be spotted at the Haunted Mansion in Dilsney World. He currently shares his room with a pair of ghost squirrels, who help him eat the peanuts tributed in his name. 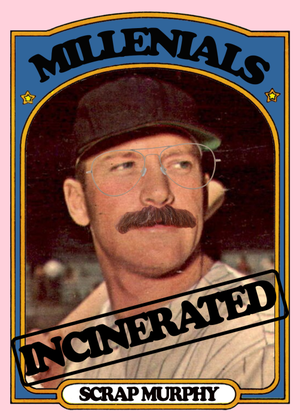 The Commissioner tweeted[1] about Murphy shortly after his incineration, offering their "sincerest condolences to [Murphy's] family," and controversially adding that "more #heated blaseball action" was forthcoming. Murphy's family declined to comment, but fans expressed their outrage[2] over the fiery double entendre on social media.