(Redirected from The Wyatt Masoning) 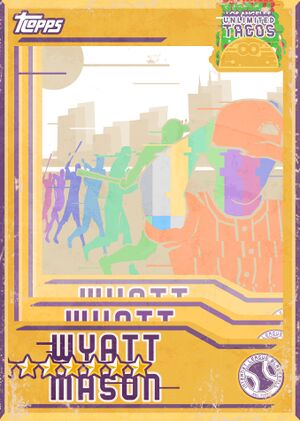 The Wyatt Masoning refers to the event that occurred at the Season β3 election results in which the entire team roster of the Unlimited Tacos inexplicably assumed the name of the team's worst hitter, Wyatt Mason.

Prior to the start of Season β4, league officials attempted to repair the Unlimited Tacos players with the help of fans, to mixed results.

Ultimately, the Tacos never played any league games with all players sharing the name Wyatt Mason.

Little is know about the definite cause of the anomaly, though it is suspected to be heavily related to the passing of the Interviews decree, which declared the following:

The tear in spacetime is the source of the Tacos' name change from the Los Angeles Tacos to the Unlimited Tacos, but there was no apparent reason that Wyatt Mason would be directly targeted as a part of this event.

In the December 15th, 2020 Inside a Blaseball stream, it was stated that as a nod to the multiple realities in the Grand Unslam, The Game Band attempted to replace two of the Tacos with slightly different versions of Lee Davenport, the Taco who pitched during the Grand Unslam, and get rid of Wyatt Mason, whom they understood to be the least popular player on the Tacos. The code that was meant to perform this during the election instead caused all of the Tacos to be renamed Wyatt Mason.[1] 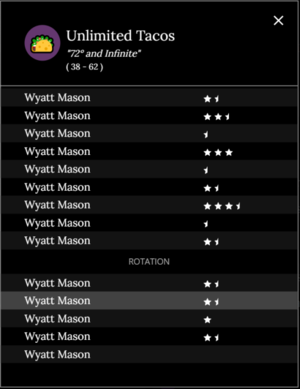 Immediately following the Season 3 election results, the entire Unlimited Tacos roster now bore the name Wyatt Mason. None of their original stats changed (other than Wyatt Mason née Comfort Glover, who suffered a loss in stats from the Exploratory Surgeries blessing). The players also retained all of their individual, newly-revealed Interview statistics and characteristics, suggesting that they were still the original Tacos players in at least some form.

Within a few hours, Umpire Chaff spoke in the Tacos team channel and stated:

It is assumed that the umpire referenced the original Wyatt Mason and not any of the other team members newly-dubbed Wyatt Masons, nor the collective Wyatts Mason. What the nature of this "power" is has yet to be seen, as statistically Mason is still one of (if not the) worst players in the entire League.

The Unmasoning occurred live via tweets from @blaseball [3]

The Unmasoning (or sometimes, The Wyatt Masoff) refers to the semi-successful attempt to "repair" the Wyatt Masoning. This was performed by the league (and presumably by The Commissioner themself) during the post-Season 3 extended siesta, and was communicated to fans live via Twitter over the course of two hours.[3] The end results were mixed at best, with most players still retaining part of the name Wyatt Mason, and others gaining new errors altogether. Despite this, the official tweets remind that "the league bears no liability."

The mechanics by which the Wyatt Masoning was "repaired" has been left vague, but The Commissioner's tweets identify that the problem was "user error [that] resulted in Feedback," which was blamed on a contractor (who has since been "terminated"). The repair process began with the message: "Calibration complete. Adjusting Harmonics." Then, every Tacos player was listed by their original, pre-Wyatt Mason name, denoted by the command "Localizing," and accompanied by a "Frequency" number sandwiched between a shuffle and heart emoji (which resemble Twitter's Retweet and Like icons).

Many fans who participated in the event quickly observed that the number of Retweets and Likes given to each player's tweet would later indicate how much of that player's name is fully repaired. The frequency's whole digits (before the decimal) determined the Retweets needed to repair their forename. The frequency's fractional digits (after the decimal) determined the Likes needed to repair their surname.

Approximately one hour after the start of localizing frequencies, The Commissioner tweeted the message below, which signaled that no additional Retweets or Likes would be counted and that no further names would be changed:

Upon this result, The Commissioner remarked on this information by saying, "wait"[5] and then ending all frequency-localizing with the alert, "FEEDBACK DETECTED." This may indicate that the original Wyatt Mason was the "Feedback" error itself that caused the Tacos' name changes, rather than the incident being purely external.

Ultimately, the original Wyatt Mason came to be named NaN as a result of the localizing; an outcome that was deemed "Good Enough" by league officials.[4]

Two players, Sexton Wheeler and Lee Davenport, had their surnames misspelled by The Commissioner in the frequency-localizing tweets. Once repairs ended, both players kept these misspellings and are now known as Sexton Wheerer and Wyatt Dovenpart, respectively.

Prior to the events of The Wyatt Masoning, the original Wyatt Mason was a middling two-star hitter for the Tacos. Mason swallowed a peanut and had an allergic reaction on Season 3 Day 50, and then swallowed another peanut for another allergic reaction on Season 3 Day 64. This double-peanutting left Mason as the worst hitter on the team, dropping Mason to one-half star.

Mason is one of the only known players to have swallowed two peanuts, and possibly the only player to have swallowed a peanut in two separate games. Other than this, Mason was a relatively unremarkable figure and had gained no reputation as a fan favorite or heel.

The Wyatt Masoning stands as Mason's singular achievement within the realm of Blaseball—a claim to fame that they now can hardly claim due to no longer being named Wyatt Mason.