Crowvertime (also known as Birdemic, The Lovebirds, Outn't, The Combover, The Love Train, and The Curious Case of the Twelth Inning of the Lovers At Jazz Hands, Consisting of Far More Outs Than Is Typical To The Game of Blaseball, Due To Mysterious Avian Interference And Resulting In A Victory For The Team From San Francisco) is a name given to the Season β9, Day 1 game between the San Francisco Lovers and the Breckenridge Jazz Hands. 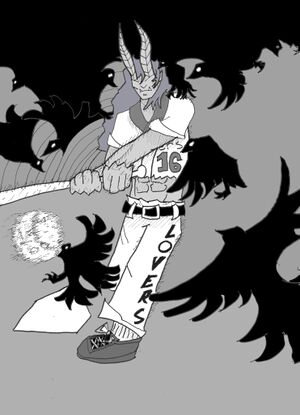 In the top of the twelfth inning of the game between the Lovers and the Jazz Hands, Lovers batter Alexander Horne was ambushed by Crows, fleeing the field and resulting in the third out of the half-inning. For unknown reasons (see theories below), this out did not end the half-inning, and the Lovers continued to bat for 21 additional plate appearances, scoring seven runs and accumulating a total of 16 outs before Helga Moreno was caught stealing second base, ending the half-inning. The runs scored after the third out remained on the scoreboard and, despite the Jazz Hands scoring a run in the bottom of the twelfth inning, the Lovers were awarded the win.

Precisely what caused the Crowvertime is unknown, although the then unique occurrence of Crows causing a third out is considered a likely candidate. Unlike many other unusual game occurrences, the Crowvertime did not result in a siesta or change to the score of the game. The term "Crowvertime" was coined by the fans as the most widely-used nickname for the event.

Members of the Society for Internet Blaseball Research have speculated that the process of birds causing an out somehow caused umpires to fail to check if the out ought to end the inning, and when calling subsequent outs, umpires only assessed if the number of outs was exactly equal to three, rather than three or greater. It is believed that some part of the process of calling an out for a player caught stealing did consider the possibility of outs greater than three, ending the half-inning, although further research has yet to reveal the truth.

Though outs caused by Crows had been seen several times in other games on Day 1, following the Crowvertime no further bird-related outs or other avian phenomena such as deshelling occurred for the duration of Season 9.