This page is written in-character. This event represents interplay between the game and community lore that had significant impacts on the game's text. 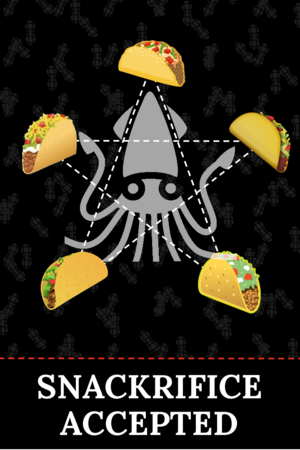 Propaganda style imagery of the snackrifice depicting the five Tacos pitchers, the Red Line, and the Squid

Snackrifice was a campaign led by the Unlimited Tacos throughout Season 7 to get all five of the team's pitchers Shelled. The campaign had two intentions: to prevent the league's best (and thus most idolized) players from being shelled, and to spite the Gods and intentionally disrupt the rules of Blaseball by removing all of a team's pitchers from play.

The initial idea for Snackrifice began shortly before the start of Season 7 following the reappearance of the red line on the Idol leaderboard. The line now had ten players above it versus only three slots in Season 6. Based on the events of the past season’s Third Strike, fans assumed that every player above the line (other than peanut players) would be Shelled.

Fans then quickly noted that every team’s lineup consists of ten players, and thus it could be possible to get every batter on a team shelled, rendering the team incapable of playing. The Unlimited Tacos' fans offered their team as tribute to test what would happen, as the team was already so bad as to have nothing to lose. However, noting the difficulty of getting top players off the top spots on the leaderboard in the previous season, plus the competing desire to get the peanut players above the line, the plan shifted to offer up a more-achievable goal of all five players in the Tacos’ pitching rotation instead.

The Tacos engaged in a week of campaigning to get pitchers Patel Beyonce, Alejandro Leaf, Wyatt Pothos, Francisca Sasquatch, and Sexton Wheerer above the red line, which coalesced around Season 7, Game 80 (Thursday, September 18). No Tacos pitchers had appeared on the leaderboard up to that point due to the fact that idoling a Tacos pitcher meant giving up on potential earnings from idolizing more profitable players. However, after Day 80, momentum built and all five Tacos pitchers quickly rose through the ranks. The plan first came to fruition with all five pitchers above the line on Day 84.

The pitchers remained relatively stable above the line until the final games before the end of the season. Those hours saw rapid, volatile changes to the idol leaderboard due to the competing desires to have Tacos pitchers and peanut players above the line, plus the battle over the highly contested tenth spot between York Silk and PolkaDot Patterson.

After the Day 99 games and ten more minutes of frantic idol swapping, the board finally locked with all five pitchers and all three peanut players above the line. The Shelled One appeared and shared a lengthy message, the later portion which directly referenced Snackrifice:

WHAT IS THIS THOUGH?
A SHOW OF UNITY?
YOU WITHHOLD YOUR LABOR?
YOU THINK THAT GIVES YOU POWER?
PITY

However, before any further admonishment or punishment could be dispatched, the Shelled One was interrupted by the first appearance of The Monitor.

Once The Monitor left and the site returned, it was revealed that all of the Tacos pitchers had remained above the line and had been Shelled, along with Axel Trololol (who never left the first spot on the board throughout) and PolkaDot Patterson, while the peanut players became Honey Roasted. The Snackrifice was a success.

During the postseason games, the Tacos continued the campaign by pushing for the removal of the pitchers from the idol leaderboard. This was done to avoid the blessings that could trade them to another team and replace them with a non-shelled pitcher, thus ruin the game-breaking aspect of the Snackrifice. Ultimately all Tacos pitchers were removed from the board and none were traded away through blessings.

The Commissioner released a statement shortly after the Shelling took effect, saying “An announcement from the Front Office regarding the situation in Los Angeli: Play must continue.”[1] At the start of play in Season 8, a new pitcher named Pitching Machine was added to the Tacos pitching roster, enabling normal play.