Big BucketsIf a home run lands in a Big Bucket, it scores an extra Run.
PsychoAcousticsIn Feedback or Reverb, PsychoAcoustics will occasionally Echo one of the Away Team's mods to the Home Team, for game-long use.
Secret BaseThe Secret Base is a hidden base beyond 2nd that allows a baserunner to hide between innings.
BirdhousesBirdhouses invite Birds to come live in your Ballpark.
Every time a foul ball is hit in a ballpark with Birdhouses, a bird will be added to the ballpark, reducing its eDensity.
Grind RailThe Grind Rail allows a chance to steal directly from first base to third base, as long as they have the skills.
HoopsWhen a Player hits a Home Run, the next batter can go up for an alley oop to score an extra Run.
Heat MagnetThe Heat Magnet will absorb heat from an incineration and pass it on to the Thermal Converter.
Ball PitEvery Foul Ball hit in this Ballpark will add 5x the eDensity that it normally would.
Peanut MisterA Peanut Mister will occasionally cure a Player of their peanut allergy.
Peanut Misters can also remove the Superallergic modification from players.
LCD SoundsystemThe LCD Soundsystem will boost both Players involved in a Feedback swap by 5%.
Echo ChamberIn Reverb, Echo Chambers will occasionally provide Reverberating and Repeating modifications to Players for game-long use.

Al Pastor Memorial Park (also known as the LA Taquería) is the home ballpark of the LA Unlimited Tacos. It is presumably situated in Los Angeles, the home of the Tacos, and named for Al Pastor, the current manager of the Tacos. 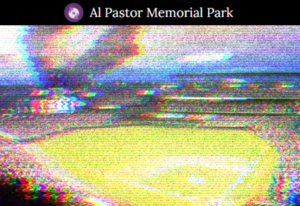 The ballpark is thought to be located in the middle of the infamous six-way stop sign intersection in Bleverly Hills. Despite the ballpark's construction in ███, the roadway has continued to function as an active intersection to this day. Games scheduled during rush hour traffic are known to be especially hazardous, though interference from distracted drivers is not considered foul play.

Since the end of Season 4, Al Pastor Memorial Park has been home to a growing population of Scuttles. Visitors are advised not to feed or attempt to pet the creatures, no matter how friendly they may seem.

It is rumored that the area under the ballpark is filled with ground beef and pico de gallo. It goes for miles and miles underneath the surface of the Earth and is mined for all of the world's taco production.

The signature snack of Al Pastor Memorial Park is the Hotdaco, a hot dog served in a hard taco shell. It is one of the many[source?] options available at the Taco Chariot , which is an oft-advertised perk for fans of the team.