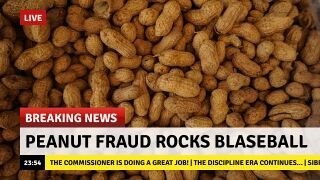 News networks across the globosphere dedicated 24 hour coverage to the scandal as it unfolded.

Peanut Fraud is a crime involving the illegal acquisition, ingestion, materialization or dematerialization of peanuts, for the purpose of nutrition, monetary gain, monetary loss, squirrel raising or any other activity. It is considered treasonous by Internet League Blaseball.

The first recorded case of Peanut Fraud happened in Day 2 of Season 3, when capitalists committed sufficient enough Peanut Fraud to warrant the first non-siesta stoppage in Blaseball history. Under international law, it is one of the worst crimes you can commit. It is one of the seven deadly Blaseball sins.

At the beginning of Season 3, the peanuts decree went into effect, allowing participants to buy and consume peanuts.This introduced volatility in the Blaseball economy that set the stage for the turmoil that followed.

The first sign of Peanut Fraud occurred when Play on Season 3 Day 2 stopped suddenly. Shortly after, the Umpires released this statement:

Chaos ensued among Blaseball participants as little was known about the origin or nature of the Fraud at the time. Some suspected that Peanut Fraud was linked to the possession of negative peanuts, which many participants had at the time. However, Umps confirmed that Peanut Fraud was instead a much larger scale maleficence involving hacking activities beyond what one could do when using the shop as normal. It was determined that guilty participants had gathered unfathomable millions of peanuts and coins in the span of the few short hours that peanut purchasing had been possible. The following hour, the Umps released a new statement:

"THE CHEATER DID NOT COME FORWARD BUT BLASEBALL IS INEVITABLE. THE BLASEBALL GODS WILL REMEMBER THIS."

Play began for the Season 3 Day 4 games as normal, but was stopped again by the Umpires in the 4-6th innings. Umps then released another statement:

The site again entered a traditional siesta for a time, but then entered a state of Blasphemy. All of Blaseball was replaced with The Peanut, a large rotating peanut, and the word "BLASPHEMY" in red text.

Hours later, once the Umps had restored a semblance of order behind the scenes, the state of Blasphemy ended and play resumed. At this time, Blaseball left the Discipline Era's Peanut Plague and entered Uncertainty. The games that followed on Season 3 Day 5 saw a record 3 incinerations. Whether or not these incinerations were direct punishment for the Peanut Fraud has not been confirmed.

Following the events of the Peanut Fraud, a pertinent redaction from the Book of Blaseball was removed from section 5g. The section previously read:

Following the events of Blasphemy, it now reads:

Many participants were quick to assume a link between the death of Splortsmanship and the Peanut Fraud. It wasn't until later in Season 3 when the Umps confirmed this link with the following statements:

"THE CHEATERS OF THE #PEANUTFRAUD STOLE FROM YOU ALL. WE ARE TRYING TO FIX THEIR MISTAKES AND APPEASE THE SHELLED ONE"

"THE #PEANUTFRAUD CHEATERS KILLED SPLORTSMANSHIP. YOU MUST RESURRECT IT. YOU MUST APPEASE THE SHELLED ONE. ABUSE WILL NOT BE TOLERATED."

Investigations are still ongoing into what must be done to resurrect Splortsmanship and appease the Shelled One.

Following the beginning of Season 4, it now reads:

It is unconfirmed whether this means the Shelled One has been appeased.