Peanut Bong is a player in the Shadows for the LA Unlimited Tacos and has been with the team since the Season 10 elections. Bong has played for the Miami Dale, THE SHELLED ONE'S PODS, and for the Rising Stars during the ILB Semi-Centennial.

Bong joined the league with the name Dan Bong in Season 1, playing for the Miami Dale.

At the start of Season 3, the Dan-Peanut Replacement caused Bong to be renamed Peanut Bong. This is not known to have affected Bong's playing ability.

After Game 99 of Season 6, Bong quickly moved up the Idol leaderboard along with fellow Dan-Peanuts, Peanutiel Duffy and Peanut Holloway. In the final moments of Day 99, Peanut Bong overtook Duffy to secure the 3rd place ranking just in time for The Peanut to descend and deliver its messages to Blaseball fans. The Peanut specifically questioned Jessica Telephone and Nagomi Mcdaniel, who held the 1st and 2nd place rankings respectively, but did not mention Bong. Also unlike Telephone and Mcdaniel, Bong did not gain the negative status Shelled. It seems likely that The Peanut chose to either protect or spare Peanut Bong. Soon after The Peanut's "Third Strike" speech ended, Bong was unseated from the 3rd place ranking by Duffy. No further consequences were observed.

At the end of the regular games in Season 7, Bong, Peanut Holloway and Peanutiel Duffy were above The Red Line on the Idols Leaderboard. The Shelled One then appeared and congratulated fans on properly idolising its progeny after their failure to during the previous season, causing The Third Strike. Following this, Bong had gained the Honey Roasted modification.

On Season 9, Day X, Bong was conscripted to THE SHELLED ONE'S PODS as a lineup player. Following the dispersal of the PODS during the Season 10 elections, Bong joined the Unlimited Tacos as a pitcher.

During the Coffee Cup, Bong played for Macchiato City as a lineup player.

On Season 12, Day 56, Peanut Bong was in a game with Peanut weather with Hellmouth Sunbeams player Nerd Pacheco and tasted the Infinite, subsequently resulting in Pacheco being

In the Season 12 elections, Bong was moved to the Tacos' Shadows as a result of the Foreshadow Will. They were replaced by Yummy Elliott.

During the ILB Semi-Centennial, Bong played for the Rising Stars. Bong then returned to the LA Unlimited Tacos as a player in the Shadows.

Peanut Bong is the oldest heir of the Bongs, a prominent family from Miami who made their wealth from developing and patenting smoking accessories.

Bong is the oldest of six children, and knew they were different from an early age. While their parents encouraged them to excel in school, especially their math classes, Bong could often be found sneaking out at night to practice their pitching at Slouth Beach. Because it was dark and there was no one to pitch to, Bong's pitching style developed erratically. However, at age 16, they threw a ball so hard against a wall that the wall exploded into a pile of peanuts, and that was when they knew that blaseball would be forever calling their name. The experience may even have been a sign of the name change waiting in their future.

Accustomed to being an underdog in their family of tax attorneys and business moguls, Bong was delighted to join the Miami Dale when they were spotted playing on the beach by a scout for the team. It is said Bong's family does not condone their career choices and, in a XX09 interview, matriarch Adeline Bong displayed her discontent with "Nutty not becoming a tax attorney like their siblings."

Despite their semi-estrangement from their family, Bong is an enthusiast of "natural cures" and "expanding our minds."

Bong is a practitioner of aerial yoga.

Relationship with The Shelled One

The following article appeared in a Miami newspaper during Season 10, following Bong's departure from the Dale and apparent conscription to THE SHELLED ONE'S PODS.

Miami’s Legendary Legume: Inside the Shell of the Discipline Era

Perhaps no figure has loomed larger over the current era of Internet League Blaseball than The Shelled One, and perhaps no player has come closer to that frightful deity than Miami's own Peanut Bong. Bong was an unlikely Chosen One (of three) when they were suddenly Marked by the Peanut Plague. Now he's playing for the newest and most notorious team in Blaseball, apparently subjugated, along with 11 other players. So how did a little-known pitcher for a little-known team become a batter—nay, a POD—for an implacable, vindictive God? This reporter decided to find out.

A recently leaked excerpt of an unedited manuscript thought to be Bong's rumored autobiography, Peanut Bong: Inside the Shell, may lend some clues. It paints a picture of a pampered childhood tainted by a persistent feeling of otherness, even of Destiny. From being the scion and assumed heir of a multigenerational fortune, to falling in love with blaseball after a single particularly explosive pitch, to feeling personally called by the Shelled One's changing of their name, Bong has always believed in their own significance. Is that so surprising, given that this faith has historically been fulfilled? It is well known that his family would prefer he returned to the fold, despite years of estrangement, and to the wealth that would entail. Bong was recruited directly to the ILB with no organized blaseball experience whatsoever and placed on the starting rotation right off the bat. And now, it seems, their path is indeed more intertwined with the Shelled One's than anyone but they thought possible.

Growing up, I constantly felt my family's attempts to shape me into what they wanted me to be. If I had not, I would never have learned how to differentiate myself from others' expectations—what would be the need? As it stands, I am grateful for this tension, and for the self awareness it has brought me in addition to the pain of never being enough.

When the Peanut Plague happened and my name was changed, I knew I was a part of something weird, something divine. How much was me, and how much was chance? Did it matter, now that I was Chosen? It seems not. The sudden fame of Idolization, the constant fear of meeting the Shelled One or the Monitor, the guilt that I did not have the answers my fellow players sought... I feel caught between loyalty to my chosen familia, and the reality that larger forces might tear me away from that at any moment.

Loyalty has always been something of an Idol to me: something to be earned, and bestowed, never owed or demanded. It is something I've given to my team in a way I have never given to anything but my own pursuit of truth. But now, so much is changing. I have been Chosen, uplifted, even spoken to by a God. If it holds my destiny, where should my loyalty lie? I know I will be called upon, even if I don't know that entails. Resisting the summons would be denying Fate. When the time comes, I don't think I have a choice. I must rise to meet it, even if I eventually fall.

Their teammates appear bewildered and saddened at Bong's abrupt departure. Contrary to their introspective personal work, Peanut was something of the "class clown," and the energy at the team's events has not been the same. I caught up with a few Dale players to try to learn more about the pitcher's eventful last few seasons:

Don Elliott volunteered a memory of a tender moment from the days before Bong's disappearance.

We were kicking back with some boysenberry La Croix at the team pool, just looking up at the stars and joking around. But suddenly Nutty [Bong] was like "have I been doing a good job of fitting in? Do you think they like me?" Now, that might seem sudden, but if you know Nutty, you know he's always in his feelings. He might seem like a bit of a gremlin but he's thoughtful, he wants to be taken seriously as a friend, as a person. So I did what any Don Elliott would do and told him the honest truth. I said, "Nutty, you're perfect just the way you are." And he smiled, looked back up at the sky, and said, "you know, I heard Jupiter has a moon that smells like farts." That's Nutty for you.

Fellow Miami native Caleb Novak agrees that Bong had been struggling with their identity more and more since Season 3.

Peanut and I were doing aerial yoga together at our usual Thursday party, Thravesday Night Funder, and it was clear he couldn't get the big peanut off his mind. He was talking about the nature of family and what we owe each other and other philosophical stuff, which is typical Nutty, but he kept coming back to his encounter with the big guy in season 6, when he was the only one above the Line who came back unShelled, and again in season 7, and what it meant that he was Honey Roasted now. He's always deep but this was, like, frantic. Unsure, afraid, and actually a little excited. He had been skeptical of the Shelled One, like we all were, but he started opening up after all that.

According to Jasmine Washington, Bong's absence has hit some harder than others. "Don't tell him I said this, but Randy [Dennis] is really struggling without Nutty. They were very close, and I think he's a bit lost, trying to figure out how best to keep going without them here. He's... he's trying to be a Mall Goth," said Washington, referencing an alternative subculture that combines a dark aesthetic with air-conditioned loitering for the purpose of preserving their heavy eye makeup. "I heard him on the phone with [former Dale hitter] Hahn Fox. I think he was trying to call her a "prep" but, as you know, Randy is incapable of being mean so he called her a "pep." She was thrilled. He was crushed." She sighs, clearly worried. "Another time, I took him to the animal rescue because we love petting the puppies there. They have a little pet shop area, right? Randy tried to steal a spiked collar. I say 'tried' because he turned around, started crying, and gave it back. Luckily they just thought he didn't like it. Anyway, he's pretty upset. He's started buying Crocs. Everyone knows that's a gateway sandal."

Bong's disappearance left them more questions than answers. Very few clues have been found about the night they were conscripted to THE SHELLED ONE'S PODS: string of increasingly bewildered tweets, and a photo of Bong at the plate during Day X, looking disoriented. 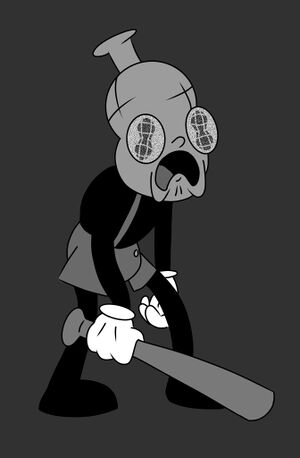 Bong possessed by the Giant Nut by Churgalax

For now, our guess is as good as anyone's as we look for any information about what the Shelled One wants from us and what will become of the players it stole. Missing persons posters paper Worldwide Field and telephone poles throughout the city, with phrases like "Have You Seen This Nutt," "The Search Continues," and "Bring Back Bonggers." Our hearts go out to them, and our prayers go out for Peanut's safe return.