Before each home game, they perform their self-penned team song "Smells Like Team Spirit" in lieu of "The Star-Spangled Banner", which according to team captain and frontman Theodore Duende "doesn't even slap". Pitcher Mike Townsend was kicked out of the group after what the other band members deemed "poor performance in both senses of the word", but remains on the Garages' roster due to legal complications.

The bats used by the Garages are modified to have the appearance of electric guitars, though whether these bats can actually play any music other than harsh noise is debated by some Blaseball fans.

The group's early output was animal-themed. A representative song of this era is "About a Squirrel", which is about a squirrel.[1]

The group recorded "Black Hole Sunbeam" to commemorate the absolute thrashing the Garages gave the Hellmouth Sunbeams on Season 2 Day 54.

THE SUN IS OUR ENEMY is the official zine of the Garages, edited by Allison Abbott and featuring contributions by various members of the organization.

In Season β1, the Garages finished fifth in the Chaotic Evil division. Following the opening of The Forbidden Book, star pitcher Jaylen Hotdogfingers was the first player in league history to be incinerated.

Despite competing for a playoff spot for most of Season β2, the Garages finished with a 46-53 record, good for a tie for third place in their division. On Day 77, The Garage Opening occurred. The event has prompted some fans to use the phrase "the Garage Door is open to all fans", referencing both the event itself and "the liminal space between the excitement and disappointment that comes from being a fan of a Seattle splorts team".[citation needed]

The Garages kicked off Season β3 with a 13-7 road victory against their heated rivals the Hellmouth Sunbeams. Despite the Sunbeams benefiting from a fourth strike, Mike Townsend earned the victory, much to the shock and amusement of fans. Captain Theodore Duende want 4-for-5, while Allison Abbott and Avila Guzman each contributed home runs.

Following the opening of The Forbidden Book at the end of Season β1, some[Who?] began speculating that the entire Garages team does not actually exist. Proponents of this theory claim that the Garages players and their fanbase are "delusional, hallucinating, enthralled by the restless spirits of Seattle, or perpetuating a hoax designed to attack the heart of the game of Blaseball itself". The most prominent supporters of this conspiracy have been the Hellmouth Sunbeams.

Some fans and players speculate that Jaylen Hotdogfingers was actually murdered by the Sun rather than incinerated by a rogue Umpire, or that she is not actually dead.

The team slogan is most likely a reference to the song "Smells Like Teen Spirit" by Nirvana. 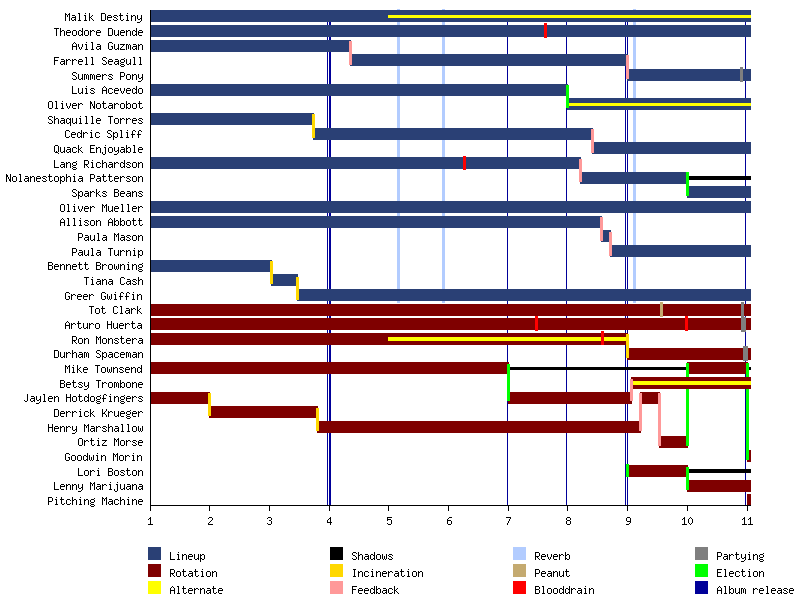