The Seattle Gum Wall is a historic landmark located in Post Alley under Pike Place Market in Seattle, and serves as a protective barrier around a portal to Dark Seattle. The wall is a famous example of disgusting[NPOV] art. Both sides of the alley are covered in chewed gum that tourists and locals alike have stuck to the wall. The gum has been in many mouths, some pieces multiple times, and is not safe to eat. 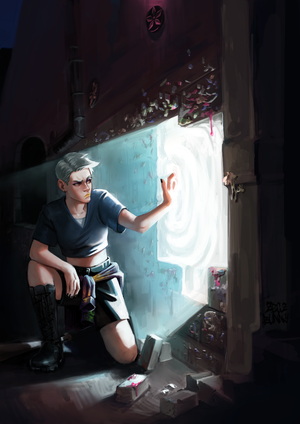 Farrell discovering the portal after trashing the gum wall. By @Zecz_Bunny

The Gum Wall was destroyed some time between Seasons 4 and 8 of Blaseball by Farrell Seagull, a mural artist and art criminal who played for the Seattle Garages. She later reported that after scraping gum away and demolishing bricks with a sledgehammer, she encountered an inky veil beneath them that she then proceeded to venture through with no hesitation, as any human would. This marked the first documented incident of an individual entering the Mirror Dimension[Which?] containing Dark Seattle.

Despite its destruction, the Gum Wall will reassemble every day after it has been destroyed, including covering itself in gum from unknown sources. One observer gave an account of a time that they had gone to the gum wall to add some gum themselves as a tribute to Farrell Seagull (who they insisted would love to see what they had done). The observer reported that they were in time to watch the wall reassemble and, as it did, the gum that they were chewing was sucked from their mouth and slathered on to the wall.

Malik Destiny was previously banned from approaching the Gum Wall, however this ban was lifted in an attempt to further damage the wall and bring an end to its existence.