The Seattle Garages made their Internet League Blaseball debut in Season 1 as members of the Evil League in the Chaotic Evil division. After a lackluster season, the team finished eighth in the Evil League, and sixteenth in the ILB. In the Season 1 Election, fans voted to open the Forbidden Book, which resulted in the incineration of star Jaylen Hotdogfingers. The Garages won no blessings. 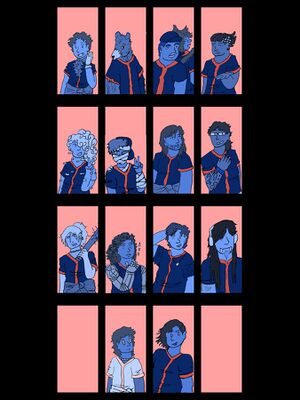 The Seattle Garages as of Season 1, by Cori

The Seattle Garages experienced no changes to their roster over the course of the season and postseason.

On Day 90, Garages pitcher Jaylen Hotdogfingers was the first player to pitch a perfect game.[1]

The Seattle Garages were one of two teams immediately affected by the passing of Season 1's Decree.

The Seattle Garages won no blessings.

A bar graph depicting the Season 1 Garages wins over .500 across the entire season. We'll suck forever.

The Seattle Garages arrived in the ILB as a bold new concept: A combination splorts team and musical supergroup that would tear up the field and rock the stage, delighting Fans the world over. Late Seattle Mayor Jaylen Hotdogfingers held an open audition to assemble a crack team which included stars from Seattle's grunge and punk scenes, up and coming athletic prospects, and also Mike Townsend. Unfortunately, success was not in the cards for the band's inaugural season, as performance floundered and tensions between members flared. Critics gleefully noted the the Garages were the latest in a long line of Seattle splorts teams cursed with mediocrity. Despite the best efforts of slugger Theodore Duende and Hotdogfinger's pitching prowess, the Garages finished in the bottom half of the league and well below .500.

After their disastrous first season, the Band was eager for the reprieve and possible improvements the election would bring. Unfortunately, this hope was misplaced. Fans voted to open the Forbidden Book, triggering a Solar Eclipse and causing a Rogue Umpire to Incinerate star pitcher and Seattle mayor Jaylen Hotdogfingers. Shocked and devastated by this sudden turn of events, the Seattle Garages declared war on the Sun and the Blaseball Gods, demanding revenge for Hotdogfinger's untimely passing.