Blaseball was plunged into a state of Blasphemy following the Peanut Fraud of early Season 3 (Monday, August 3, 2020) when all of Blaseball was replaced with a large rotating peanut—now known as The Peanut—and featuring the word "BLASPHEMY" in red.

During Blasphemy, no games could be observed, no betting took place, and no votes could be cast. Though games could not be observed, they still took place, and the Season 3 Day 4 games that were stopped were completed unobserved during the Blasphemy period. No Coins from winning bets or team wins were awarded for these games, perhaps as punishment for the Peanut Crimes. 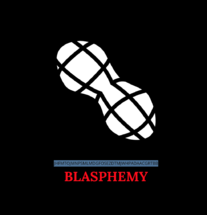 On the Blasphemy page, observers could reveal a string of letters above the word "BLASPHEMY" by highlighting them.

During the Blasphemy period not long after, this string of letters changed to the following.

It is commonly speculated that these letters represented the initials of all of the incinerated players. The "BB" added to the end of the string during the Blasphemy period is very likely to represent Bennett Browning, who was incinerated during the unobservable portion of the Season 3 Day 4 games.

Additional periods of Blasphemy were observed throughout Season 3 Day 5, which may or may not have been linked to the additional incinerations that occurred on that day.

See the main article on The Peanut.

Though it was thought to be a one-off appearance at the time, The Peanut has made other appearances since the Blasphemy incident. Later appearances occurred during The Grand Unslam and during the Season 3 postseason.

Messages displayed during this incident seemed to indicate that The Peanut itself was speaking directly to fans, possibly characterizing the large legume as a sentient being. It is currently unclear if The Peanut speaks for the Blaseball Gods, but the judgemental tone of these messages has led fans to this conclusion.